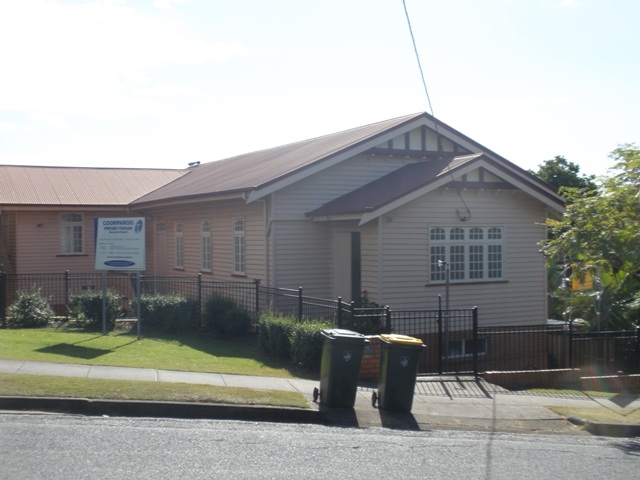 The Coorparoo Presbyterian War Memorial Church and Hall are situated within the Surrey Hill precinct, a garden-city estate designed in 1924. The Presbyterian Church acquired three allotments in December 1927 and Howard T. Sydes was employed to design a hall, in lieu of a church building. The hall was opened in 1928 and used for services until a church building could be completed. The foundation stone for the Church was laid in May 1950. Architect and returned serviceman Thomas H.A. Cross designed the church, which occupies a prominent location on the corner of Letchworth and Emlyn Streets. On 11 November 1951, the church was opened and dedicated as a memorial to those who died in World War I and II. The Coorparoo Presbyterian congregation continues to use the brick church as its place of worship.

The initial settlement of the area now known as Coorparoo was relatively slow. Coorparoo land sales occurred from 1856 and gradual development occurred as purchasers, mainly farmers and land speculators, acquired land at these early sales. By 1888, the locality had a population in excess of 2,000 people in over 550 homes. The population growth in the area saw ribbon development along the main transport arteries of Logan Road and Old Cleveland Road and pocket development in areas such as Stones Corner, while the wealthier residents took up sites on the hill tops especially along the Cavendish Road ridgeline. By the 1890s, the Stones Corner and Coorparoo area included a socio-economic mix that ranged from farmers to politicians. These included Frederick Brentnall M.L.C., James Stodart M.L.A. and Walter Henry Barnes M.L.A., business men such as Nathaniel Lade and Reuben Nicklin and important public servants such as Edward Deshon C.M.G., Reginald Mulholland King, James Evan Burstall and T.W. Connah.

Among these prominent nineteenth-century residents was Alderman James Hipwood, mayor of Brisbane in 1886 and 1887. In addition to his role in politics, Hipwood was involved in the Hipwood Brothers foundry in Eagle Street and was an active member of the Coorparoo Shire from its foundation in 1888. In the same year, Hipwood acquired a large holding of over thirteen acres in Coorparoo, naming it ‘Surrey Hill’. The site included a large wooden residence with views over the river and was accessed by a long driveway, now Shakespeare Street.

Although not distant from the city, Coorparoo remained a semi-rural area until the 1910s. The population began to increase rapidly following the extension of the tramline to Stones Corner in 1915. The interwar period heralded a period both of residential expansion and developmental consolidation in Brisbane. With the extension of tramlines, suburbs such as Greenslopes, Camp Hill and Coorparoo experienced major increases in residential development throughout the 1920s and 1930s. Hipwood’s property played a large role in this development.

In 1926, following the death of James Hipwood, his thirteen-acre holding was sold to Philip James Symes and Robert John Archibald, and allotments in the ‘Surrey Hill Estate’ were soon offered for sale. Surveyor’s plans for a garden-city development of the site had in fact been approved two years earlier, in May 1924. Hipwood’s house was demolished and an Australian town planning pioneer, the Brisbane City Council Planner, Ronald A. McInnis, subdivided the land for development. He chose to follow a garden village philosophy, and used the contour lines so that the houses ring the hill top. The Surrey Hill Estate also embodied some of Sir Ebenezer Howard’s concepts, particularly the garden city town-planning design, with its idea of planned communities designed for healthy living in wholesome small communities and beautiful surroundings. This concept, along with the large allotments, city views and proximity of public transport, ensured that properties in the Surrey Hill Estate were snapped up by well-to-do residents in the 1920s and 1930s. The construction of high-quality architecturally-designed residences added to the appeal of the estate.

The increasing population of Coorparoo led to a greater demand for other services, including the provision of religious facilities. In 1925, it was decided at an ‘enthusiastic meeting’ of Coorparoo and Greenslopes’ Presbyterian residents to establish a church in the district. Accordingly, in December 1927, the Presbyterian Church of Queensland acquired three allotments of the Surrey Hill Estate with a view to building a church on the site.

Presbyterians had featured prominently in the early settlement of Brisbane, with the first Presbyterian service conducted by Rev. John Dunmore Lang in 1845 and the first church erected in 1850. Growth had slowed in the 1870s but a revival in the mid-1880s boosted congregation numbers and encouraged the construction of a number of churches. However, Coorparoo’s semi-rural nature and slow development meant prior to 1913 the only church in the Coorparoo district was the Wesleyan Methodist Church, erected on Cavendish Road in 1886. Although a Catholic and Anglican church had been built by 1922, the Presbyterian faithful remained without a church building, instead meeting in various places throughout the district.

As well as being the first Presbyterian Church in the area, the church would be the only non-residential building in the Surrey Hills Estate. On opening a fete to raise funds for the building, the Presbyterian Moderator, Rev. William Radcliffe, expressed the hope that the Coorparoo church would be ‘worthy of the excellent site, as in and around Brisbane one found many poor sites and church buildings owned by the Presbyterian Church.’ Perhaps reflecting this attitude, the congregation decided to construct a hall to use for worship services before embarking on the more ambitious project of erecting a church. Howard T. Sydes, who had also designed some of the Surrey Hill residences, was employed as designer, while Warendorff and Pipe successfully tendered to construct the hall, a timber building with a double gable and galvanised iron roof. The estimated cost of £1,400 was funded by some of the local residents, fundraising events and a small mortgage. Stump capping day occurred on 12 May 1928, and the hall opened for church services on 21 July, ahead of schedule. The attendance of 300 parishioners confirmed the need for a local Presbyterian church.

The congregation continued to use the hall for services and other events until the 1950s, when a church building was erected on the corner of Letchworth and Emlyn Streets. The church was designed by architect Thomas H.A. Cross, later of the firm Cross and Bain, whose ecclesiastical designs include St Paul’s Anglican Church (1952) and Toowong Presbyterian Church (1960). Cross was also a returned serviceman, appropriately enough, as the Coorparoo church was the first of several planned Presbyterian churches dedicated as a memorial to those who died in World Wars I and II. The foundation stone of the memorial church was laid in May 1950, over a year before its completion. Estimated to cost £7,185, the church was eventually constructed at a cost of £10,000. The brick Gothic-style church featured a steeply-pitched timber gable roof, gabled entrance porch and side buttress. It was officially opened on Remembrance Day, 11 November, 1951, with a congregation of nearly 600 people present.

Later additions for the church include a new manse at 15 Howard Street, acquired in 1952 and additions for a Sunday School which were completed in 1958.

as the first non-residential building constructed on the Surrey Hill Estate in 1928 it is a reflection of the growing need for a spiritual centre in the experimental 'garden-city estate' as successful development occurred and the population increased.

as the first set of religious buildings constructed on the Surrey Hill Estate they are important components of the experimental planned community that focused on the garden city philosophy.

as the first Presbyterian Hall and Church in the district that has played a role in the spiritual lives of its congregation since 1928.