The first building constructed as part of this Catholic precinct was the timber-framed church and school designed by Joseph Warren and built in 1913. The brick presbytery was built the following year but by the 1920s the Catholic community had outgrown the church facilities and it was decided to build a larger church. The Interwar Romanesque style church, which has become a local landmark in Stones Corner, was designed by architect Henry James (Harry) Marks and consecrated by Archbishop Duhig in 1925. All three buildings have undergone changes since their construction, some moreso than others, however they have all remained in continuous association with the local Catholic parish.

The present church of St James at Coorparoo is one of the three almost identical churches designed by Toowoomba architect, H.J. Marks. At the request of the parish priest, Fr J. O'Leary, it was identical in design to the church of his friend Fr Foughy, parish priest of Laidley. When opening the new church on 29 November 1925, Archbishop Duhig described St James as "an architectural gem", and noted the trend in ecclesiastical architecture away from the Gothic style and towards the "Romanesque arch of the Renaissance". This was the second church to be built on the site. It was built to accommodate the growing congregation that had become too large for the original timber church-school.

St James's Church is situated not far from Stone's Corner on Old Cleveland Road, a busy thoroughfare which dates back to the early days of white occupation in Brisbane when Cleveland was a rival port to Brisbane. Land to the north of Old Cleveland Road at Coorparoo was first offered for sale in large parcels in 1856, and subdivided into smaller residential allotments during the 1880s. The 1893 flood undermined confidence in the value of land at Coorparoo and residential development was slow until the extension of tramways into the area in 1915 and 1925.

The parish of Coorparoo and Ipswich Road was established in March 1913. It was the first parish to be created by Archbishop Duhig who recognised the need for a Catholic Church in Brisbane's southeastern district. Previously local Catholics attended St Joseph's at Kangaroo Point and St Mary's at South Brisbane. St James's parish originally included the Annerley district, which became a separate parish in 1916.  Fr Jeremiah O'Leary was appointed the first parish priest of St James, and served in this role for almost 40 years. The first churches at Mount Gravatt, Camp Hill and Greenslopes were also built under the auspices of St James.

On 6 February 1913, Duhig purchased three acres of land for the sum of £1250. A timber church-school was erected on the corner of Wecker Street (later Kirkland Avenue) and Old Cleveland Road in 1913 at a cost of £2650. The church, designed by Joseph Warren and built by E. Duhig of Wooloowin, was dedicated by Archbishop Duhig on 10 August 1913. The cost of the land and church was offset by the sale of an acre of land at Buranda bequeathed by James Toohey to the Catholic Church as a possible church site in 1883. The sale of this land for a sum of £600 required a special Act of Parliament, The Roman Catholic Land sales Bill of July 17 1913. Part of this original building remains in use as a school. After the completion of the church a brick presbytery, designed by G.H.M. Addison, was built in 1914. In 1916 a convent was opened in what was formerly the home of T.W. Connah, Auditor-General. The house, situated a short distance from the site of the church on ten acres of land was purchased for £4600 and renovated by the architectural firm of Coutts and Beresford to house the nuns who ran the school.

By the 1920s the population of the district and the size of the Catholic community had greatly increased, outgrowing the existing facilities. The foundation stone of the present St James's Church was laid by Archbishop Duhig on 25 January 1925. At that time, some £814 had been subscribed by the parishioners towards the cost of the new church. By the time of the opening and blessing ceremony, £3040 had been collected, still short of the contract cost of £9200 awarded to Toowoomba builder, D. Gallogly. Furnishings for the church cost an additional £1400. At the time of its opening the church was described by the Brisbane Courier as presenting a "striking appearance from the tram line, which runs in front of the church".

Many additions and improvements have been made to the buildings on this site including a new War Memorial sanctuary in the church, completed in 1967 to a design by P.J.L. Hanman and John Worthington. In 1975, the church was renovated for its golden jubilee. The sanctuary and exterior surfaces were repainted and 12 major leadlight windows reframed and re-leaded. In the years since the opening of the second St James church, this parish, although reduced from its original size, has continued to be the hub of Catholic worship and education at Coorparoo.f

The floor plan of the building is shaped like a cross consisting of a large nave with side aisles and two short transept wings containing vestries. To the southern end of the nave is an apsidal sanctuary. To the north an indented porch sits between two rooms which contain confessionals. One room contains stairs that access a choir gallery above the porch. The building is entered via a flight of steps to the front entry porch or to doors on each side of the nave. The eastern door is also accessible via a ramp.

Exterior
The nave that rises to a gable roof is flanked on both sides by lower skillion roofs extending over the nave aisles. The brown brick parapet walls of the church which feature rendered architectural elements rise from a darker brick base. Rendered pilasters, which divide the walls into bays, rise to a rendered entablature that is crowned with a metal flashed coping. Each bay of the nave features a single timber framed round arched window. Crowned with a hoodmould, each window comprises a leadlight pivoted window and fixed fanlight. Twin pilasters line the clerestory walls of the nave defining wall bays that feature a circular window framed by a rendered surround. Circular windows also feature in the walls of the vestries and sanctuary, the later containing stained glass. These generally have rectangular, round arched, rendered surrounds. Lunette windows to the southern end of the aisles are covered internally with rendered panels.

The two tier front facade of the building features a central indented porch divided into three bays by two large columns. These three bays continue into the upper tier brick wall past a rendered entablature. Defined by pilasters, each bay features an arched clerestory window. This front wall is crowned with a rendered entablature and a brick triangular pediment with rendered capping, apex cross and central circular vent. Reached by a grand flight of stairs, the porch is flanked on both sides by a single wall bay containing a typical arched window and crowned with an entablature and sloping parapet.

The side entry porticos of the nave have a rendered triangular pediment with apex cross supported by two large columns. Large timber panelled doors which access the nave have a rectangular leadlight fanlight and rendered cornice and are typical of the other main doors in the building.

Interior
The concrete floor of the front porch and its sloping fibre-cement ceiling lead into a spacious nave. The nave's timber floor, which consists of two different species of timber laid alternately, is carpeted to traffic areas. The raised sanctuary floor is of marble that is continued up the walls slightly in the form of a skirting. Arcading, comprising rendered columns and semi-circular arches extends along each side of the nave, clearly defining the side aisles. Identical arches span from these columns across the aisles, which have a gable ceiling clad in diagonally laid timber boards. The nave roof is supported by hammer beam trusses that are largely hidden from view by a flat ceiling. The ceiling comprises of timber boards laid length ways or diagonally with cover strips. It extends into the sanctuary that is framed by a large arch, where the cover strips are arranged in a decorative pattern. Above the nave arcading, simple rendered panels sit within each wall bay below each circular clerestory window.

Above the front entry porch, the timber gallery is cantilevered into the nave beyond the porch wall. It has a solid timber balustrade comprising of tongue and groove, vertical joint boarding. Below, the internal walls of the confessionals are plywood. Each wall is crowned with a semi-circular leadlight window.

The building is extremely intact with only minor changes evident. Some cracking to the front pediment has occurred.

This two storey Federation Style brick dwelling has a hipped roof clad in corrugated iron with a gable extending towards Kirkland Street over two storeys of bay windows. Verandahs line three sides of the dwelling on both levels. These have been enclosed at some stage with weatherboard cladding and louvre windows, some having ugly external aluminium awning type blinds. These changes have been to the detriment of the building, overwhelming its brick section. They are the most noticeable part of the building as viewed from Old Cleveland Road. According to old photos these verandahs were once the building's most notable feature. A small one storey, timber framed section stands to the rear of the building.

The original St James church according to early photographs, was a timber framed building with a central nave and surrounding verandahs. It was set above the ground on timber stumps and had a gable roof. A small porch extended from the front verandah that was reached by two flights of stairs, one to each side. Currently used as a school, the verandahs have been enclosed, the front porch removed and the building's undercroft enclosed. The steeply pitched gable roof with a quatrefoil vent to each gable are the building's most distinguishing feature identifying its previous use as a church.

for the evidence it provides of the development of the area and the presence and growth of the Catholic church and the local faith community in the early twentieth century.

as an intact example of a large, brick, Romanesque style Catholic church built in the 1920s.

as an impressive Interwar Romanesque style church; and, as a local landmark due to its prominent location above Old Cleveland Road.

as a church and school precinct that has been in continuous association with the local Catholic parish since 1914.

as one of a series of three 'identical' churches designed by prominent Toowoomba architect Henry James (Harry) Marks; and, as a presbytery designed by notable Brisbane architect George Henry Male Addison. 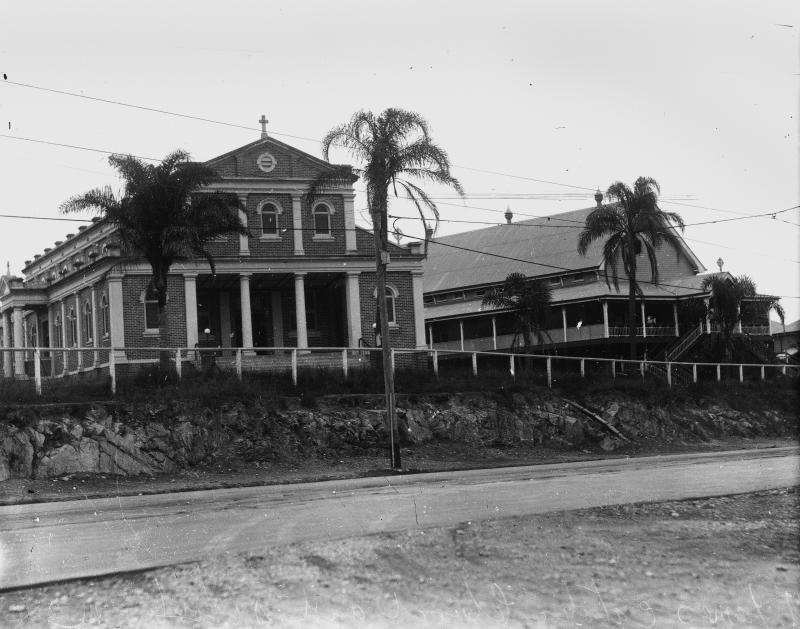