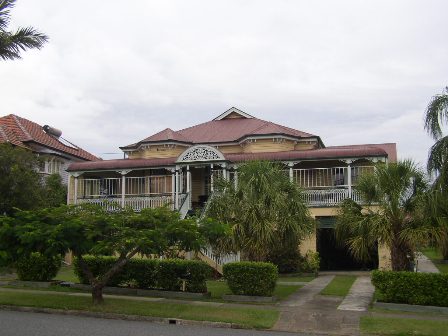 ‘Linwood’, an elegant late Victorian style residence, was built circa 1898 for William “Bill” Lahey Nicklin and his wife, Georgia Nicklin. The house once boasted a tennis court and large circular drive. It was built on a block of land previously owned by Georgia Nicklin’s father, James Hipwood, near the Hipwood family home, ‘Surrey Hill’. William Nicklin’s father, Reuben Nicklin, was a successful businessman who settled in Coorparoo with his family in the 1870s and William continued his father’s role as a prominent member of the local community.‘Linwood’ was the home of William Lahey Nicklin for over fifty years before being sold, converted to flats and relocated on the site closer to Shakespeare Street. The site was returned to Crown ownership in 1975 and became the property of Queensland Health in 2006.

At this time the newly created Coorparoo Shire had an estimated population of 2 500. Its residents were a mix of farmers and wealthy politicians and businessmen who established fine homes, often situated on the higher parts of the suburb.

William Lahey Nicklin was born in 1872 into two influential Brisbane families. He was the son of Reuben Nicklin, a local politician and businessman, and Jane Lahey, whose family was successful in the Queensland timber industry. The Nicklins were a prominent family in Coorparoo. Reuben Nicklin built two fine homes in Coorparoo in the 1880s – ‘Langlands’, now part of Villanova School and ‘Hatherton’ which became the Methodists’ Queen Alexandra Home for children. Reuben Nicklin’s grandson, Sir Francis Nicklin (William Lahey Nicklin’s nephew), was the Premier of Queensland from 1957 to 1968.

In 1895, William Nicklin married Georgia Ada Hipwood, the daughter of James Hipwood. Hipwood was another prominent Coorparoo resident, who served as  Mayor of Brisbane from 1886 to 1887. After the wedding, James Hipwood purchased six allotments in the Queens Park Estate which was adjacent to the Hipwood family home, ‘Surrey Hill’. In 1897, he transferred this land to his daughter, Georgia Nicklin. Within a short time, William and Georgia Nicklin had built a house on their land which they named ‘Linwood’.

The Nicklins acquired an additional adjacent four allotments in 1904, giving them over an acre of land on the corner of Shakespeare Street and Rees Avenue. A tennis court was established in the grounds and a semicircular drive gave access to the front entrance of the house.  Georgia Nicklin died in 1925 and the property title passed to her husband. William Nicklin played a significant role in the Coorparoo community and was instrumental in establishing the Coorparoo Bowls Club in the 1920s.

After William Nicklin’s death in 1956, the property was subdivided in half. The portion which included the house was purchased by Esmonde and Mary Rylands in 1957 and the house was relocated on the site closer to Shakespeare Street and converted to flats. In 1975, title to the property passed to the Crown. In 2011, the site was owned by Queensland Health.

This elegant timber house is symmetrical in form with the entrance opening from a timber staircase onto the centre of a wide verandah and flanked by large bay windows. The bays extend up into the corrugated iron roof creating an interesting roof form.

The verandah extends around both sides of the house and has a separate bullnosed roof. Above the entrance onto the verandah is a decorative semi-circular pediment. The verandah posts feature delicate column brackets and balustrading.

The house has been built in unsympathetically underneath with concrete blocks. However, this is partially screened from the street by vegetation.

The interior of the house has not been inspected.

as one of the fine homes built by affluent local residents on the elevated areas of Coorparoo in the late nineteenth century.

as a fine example of a substantial 1880s timber house.

for the elegance and symmetry of its design which incorporates double front bays, an interesting roof form and decorative Victorian era detailing.

as the family home for over fifty years of William Lahey Nicklin, a notable Coorparoo resident and a member of the influential Nicklin family who were early European settlers in the locality.