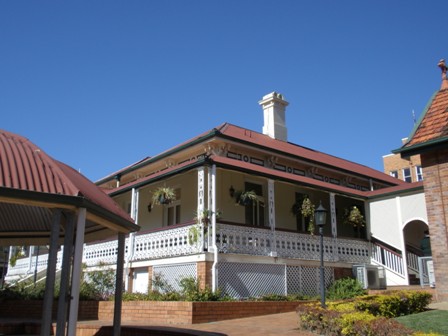 This fine residence was built in 1886 for merchant Reuben Nicklin, whose subdivisions created the ‘Langlands Estate’ around his house in 1887. As part of the Estate auction, Thomas Connah and William Brookes bought a large block that included Nicklin’s house. Nicklin, his wife and daughter died tragically in the Quetta sinking of 1890. Connah resided in Nicklin’s former residence, which he named ‘Langlands’ circa 1900. Connah became Queensland Auditor-general and he sold ‘Langlands’ to Brisbane Archbishop James Duhig in 1916. ‘Langlands’ became the Good Samaritan Convent of Saint Scholastica until 1953, when the Saint Augustine Order transferred Villanova College from Whinstanes to the Coorparoo property.

The property, on which Villanova College is situated, was originally part of a larger block of land that was first sold by the New South Wales colonial government to John Bridges on 21 October 1856. Bridges, a Brisbane resident, paid £108.15.0 for 87 acres of uncleared land that was designated Portion 58. The two large blocks ran down to the banks of Norman Creek. In 1865, Jane Temple, wife of Thomas B. Temple, of Brisbane acquired 75 acres, comprising the majority of Portions 58 and 59. On 24 February 1876, Brisbane resident Reuben Nicklin bought Portion 58 together with Portion 59 that gave him a total land holding in Coorparoo of 76 acres and two roods.

Reuben Nicklin was the manager of Butler Brothers, an Adelaide Street, Petrie Bight firm of saddlers and coach ironmongers that specialised in US acroutments. Nicklin’s residence was constructed in 1886, with the Brisbane Courier reporting the imminent building of the Coorparoo house for Mr. R. Nicklin on 8 June 1886. The Brisbane Courier states that house was designed by Messrs. Hall and Son.

Mr. A. James was awarded the tender for the building of Nicklin’s home. The estimated total cost of the building work was £4,000. The building that would become ‘Langlands’ was described as:

“A very fine two-storied brick house….containing twelve rooms, with balconies and verandas 9ft wide, all round. The house is to be finished off inside in a most elaborate manner, and the fittings and conveniences will be of a very complete character. The stables, outhouses, &c., will be on a scale equal in durability and finish to the house.”1(Note: Queensland Architects of the 19th Century states that R. Nicklin’s home was constructed during 1880-81 while the Villanova College website states that it was built in 1884. As well, Queensland Architects of the 19th Century accredits the house design to John Richard Hall, not Hall & Son.)

Nicklin subdivided Portions 58 and 59 and sold Subdivision 2 to land developers Lawrence Cusack and John Callaghan on 28 January 1886. That same day, Nicklin provided a £20,000 mortgage to Cusack and Callaghan on the property. Unfortunately, the two businessmen went into liquidation within a year and Rueben Nicklin regained ownership of Subdivision 2 on 14 January 1887.

He hired surveyor Nicholas W. Bell to resubdivide Subdivision 2 into 16-perch house blocks to create a new housing estate, which he called the ‘Langlands Estate’ of East Brisbane. ‘Langlands Estate’ created 11 streets, numbered First Avenue to Tenth Avenue, plus Main Avenue that was the Estate’s central thoroughfare. Main Avenue ran from one government road (now Old Cleveland Rd.) up to Eighth Avenue then across to Norman Creek and back across to another government road (now Leonard St.). An August 1887 estate map shows Nicklin’s large house around which the subdivisions had been created. The outbuildings such as the brick stables and fence enclosure, located at the rear of the house, would have to been demolished to make way for a new roadway named Eight Avenue. While the original front carriageway for Nicklin’s residence had run to Old Cleveland Road, the ‘Langlands Estate’ altered this route and from 1889, the access to the property was to be from a carriageway that ran to the intersection of Fourth and Sixth Avenues.

As part of the ‘Langlands Estate’ land sale, William Brookes and Thomas W. Connah acquired 4 acres, 3 roods and 32 perches on 2 June 1888. This large block comprised twenty 16-perch house blocks, plus subdivision ‘B’, together with the substantial block (resubdivision 346 of subdivision 2) that contained the former Nicklin residence and its outbuildings. Thomas Connah, a Justice of the Peace, resided in the former Nicklin home from 1890. The designated address changed from Main Avenue to Fourth Avenue in 1891 but both Queensland Post Office Directories addresses would have related to the large residence with its outbuildings. The partners also used the land for investment purposes. They obtained a £1000 mortgage from William and Thornhill Weedon in 1896, just as the 1890’s Depression was easing.

Brookes died on 16 July 1898 and he was replaced as joint trustee of the property, in 1904, by Thomas Connah Stephens. The residence’s name ‘Langlands’ first appears in the 1900 Edition of the Queensland Post Office Directories and so it is likely that Connah, rather than Nicklin, gave the title ‘Langlands’ to the 1886 house.  By 1902, Connah had become the Acting Under-Secretary of the state government’s Treasury Department. By 1908, he had risen to the position of Auditor-General. Thomas W. Connah died on 2 November 1915. In March of the following year, Herbert H. Connah and the spinster Mary Connah, as trustees of his estate, became the new owners of ‘Langlands’, replacing T.C. Stephens and the deceased T.W. Connah on the title deeds.

On 12 April 1916, the entire property was acquired by James Duhig, the Catholic coadjutor to Brisbane Archbishop Dunne. Duhig succeeded Dunne as Archbishop in 1917. This purchase by the Brisbane Catholic Archdiocese was funded through a £3000 loan from Herbert and Mary Connah. Duhig was an enthusiastic property purchaser, as he aimed to expand and improve Catholic education in Queensland, through the construction of parish churches and schools. He became known as ‘Duhig the Builder’. Duhig also bought 64 perches in neighbouring blocks (resubdivisions 314, 350, 371, 398, on 12 April 1916. Not only had Duhig obtained nearly 5 acres of land in the developing Coorparoo District but he also had gained a fine residence in ‘Langlands’, which could be used as a manse or a convent. Duhig used the property to fund projects, obtaining a £3000 mortgage from Waverley F. and Stuart W. Cameron on 3 May 1922. He also had the existing house blocks resubdivided in preparation for sale. A new title deed issued in May 1922, showed that Duhig had reduced the property to 3 acres, 3 roods and 8 perches. He sold 2 roods and 16 perches of this Coorparoo land between 1922 and 1935.

The Catholic Church utilised ‘Langlands’ to aid in its expansion across Brisbane through the creation of new suburban parishes that were based around a church and an attendant school. The Parish of Saint James at Coorparoo was created in 1913, with a church blessed on 10 August of that year. This new parish was significant.

“In the history of the Brisbane Archdiocese, the Parish of St James Coorparoo holds a place of privilege. It was one of the first two districts to come under the building hand of Archbishop James Duhig when he became Co-Adjutor Archbishop of Brisbane.”1

‘Langlands’ was converted into a convent to be occupied by the Catholic teaching Order, the Sisters of the Good Samaritan.  St James School had been constructed in Kirkland Avenue and it opened on 31 January 1916. Initially, the nuns resided temporarily in a house at 67 Kirkland Avenue, while they awaited the completion of the conversion of ‘Langlands’ into a convent building. On 20 August 1916, Duhig blessed the opening of the new Convent. As part of the four-month long building conversion work, “a beautiful brick chapel” had been added to “the large, solidly-built building” situated on “this splendid property, including ten acres of ground."1 The chapel had been blessed on the Sunday previous to 20 August 1916, after which the first mass was celebrated in the Chapel by Duhig. ‘Langlands’ was renamed the Good Samaritan Convent of Saint Scholastica and it was allotted a new postal address in Sixth Avenue. Sister Mary Helena Robinson was the Mother Superior of the Convent of Saint Scholastica. The nuns would walk daily from their convent to St James School, returning to their convent in the evening for dinner and prayers in the chapel.

“Previously two religious orders, the Irish Christian Brothers and the Sisters of Mercy, monopolized the schools and institutions of Queensland. Without discouraging their further expansion, he introduced twenty more orders of brothers and sisters. He also attracted fifteen orders of priests, many of them in the first ten years of his long episcopate."1

Six Irish priests from the Order of the Hermits of Saint Augustine (in Australia) were encouraged by Duhig to establish a boys’ college in Brisbane that offered a classical education. The Augustine Fathers opened a school that they named Villanova College at ‘Whinstanes’ in Hamilton in 1948. But the Whinstanes school site was small, with little room for expansion. On 20 April 1953, Duhig granted the Saint Augustine Order the 3 acres and 32 perches of land at Coorparoo that contained ‘Langlands’. In preparation for the transfer of Villanova College to the ‘Langlands’ site, a new convent building was constructed for the Good Samaritan Sisters within the St James School site during 1952-53.

In 1953, Villanova College transferred to the larger Coorparoo site and it was officially re-opened by Duhig on 22 November 1953. There, the Augustinian Catholic Order made ‘Langlands’ their presbytery/residence. As school enrolments rose, Villanova College needed further space for expansion. From 1953 to 1978, Villanova College bought back all of the land disposed by Duhig from his 1916 purchase. As well, from 1971 to 1993, the College acquired surrounding blocks that had originally been part of the “Langlands Estate’.

Of the 11 original streets comprising the 1887 ‘Langlands Estate’, only 6 streets remain completely intact. First and Second Avenue have been resumed for the site of Langlands Park. Third Avenue has been renamed Baragoola Street. Fourth Avenue has been renamed Dowar Street. Seventh Avenue was originally divided into two sections, with ‘Langlands’ in between them but now Villanova College’s grounds occupies that section of Seventh Avenue that had run to Fifth Avenue. ‘Langlands’ retains a link to the Estate that formed the basis of this section of Coorparoo and the former residence is maintained on the grounds of Villanova College, along with the former Good Samaritan Sisters Chapel.

Excluded from the City Plan Heritage Register listing of this site are the altered, original carriageway leading from Sixth Avenue to the front entrance of ‘Langlands’, as well as the surrounding college buildings.

being the basis of the 1887 'Langlands Estate', that provided the street and subdivision layout of this part of Coorparoo.

as Villanova College encompasses not only 'Langlands' but also the home's former grounds and outbuildings.

as centre of Catholic Church education in Coorparoo, first, from1916-53, as the Good Samaritan Sisters' convent and chapel; and from 1954 as the Augustine teaching order's Villanova College. 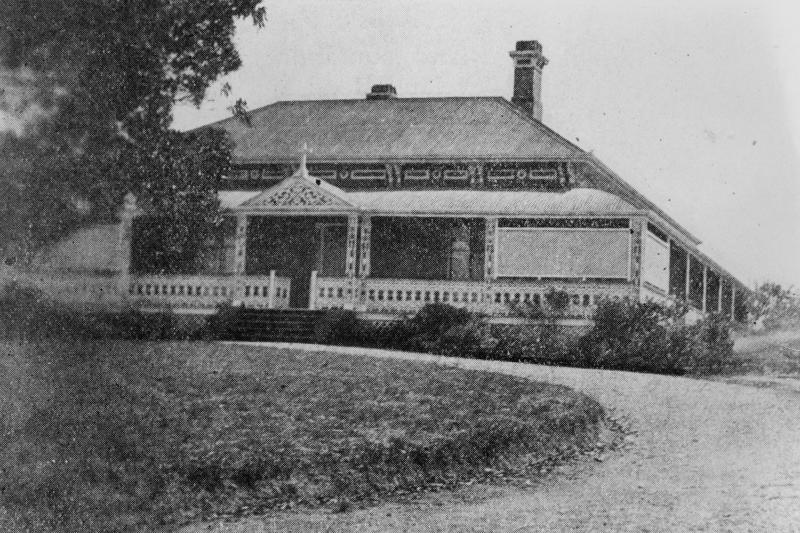