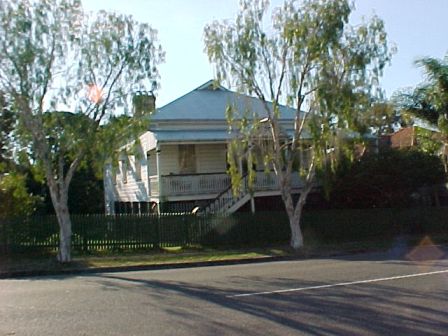 This residence was built circa 1897 for (and possibly by) carpenter Anthony Barnard Neilson. He became a local toy maker and he and his wife Annie lived there until their deaths in 1949 and 1956. The family retained title to the property until the 1970s. The property has remained in use as a private residence for more than 100 years and is a rare surviving example of a substantially intact nineteenth century residence in Coorparoo.

Coorparoo had been surveyed in 1839 as part of a survey of Norman Creek, but the area remained undeveloped until long after that date. Land sales commenced in 1856 following the construction of a bridge across Burnett Swamp (Stone’s Corner), enabling access from the north side of the river and opening up the area for settlement. Development ensued, and the region expanded from the 1870s to include houses, churches, schools and a post office, along with a number of substantial residences for some of Brisbane’s elite residents. After substantial population growth in the 1880s, Coorparoo was proclaimed a shire in 1888.

However, the growth of Coorparoo was limited to particular areas. The land on which this residence was built was part of a purchase of crown land made by Frederick Merry, Joseph Berry Jr, William Ruddle and John Potts on 15 February 1887. This purchase was a relatively late one for crown land in Brisbane, and was largely due to the fact that the area was too far removed from transportation and services to appeal to investors or owner-occupiers. But in 1886, the partners had arranged for the construction of a new bridge, crossing Norman Creek at the end of Stanley Street, appropriately named the Stanley Bridge. Having substantially improved access to the area, they purchased and subdivided a block described as Portion 51 and offered the subdivisions for sale as the Stanley Bridge Estate.

Despite the area’s new accessibility, allotments in the estate were not sold quickly. The opening of the Cleveland railway line in 1889 further improved transportation to the estate, but the line ran through the middle of the estate, with the station still some distance away. Furthermore, much of the land was low-lying and, as was discovered after the floods in the 1890s, flood-prone. Stanley Bridge and the surrounding land were entirely submerged in the 1893 flood. Land in Coorparoo suffered a reduction in value as a result, and very few residents lived in the Stanley Bridge Estate in the nineteenth century.

This sixteen-perch block (subdivision 460) was purchased in 1889 by Henry Burns and transferred to Ambrose Elmes in 1893. Neither owner appears to have resided on the site. In 1895 Annie Neilson, wife of Anthony, purchased the block. Unusually, the Neilsons had lived in the Stanley Bridge area from around 1890 and had continued their occupation, regardless of its disadvantages. Their Stanley Street East house was constructed by 1897, when Anthony Neilson was first listed in the Queensland Post Office Directories as residing on the street. The house, a vernacular wooden residence with ornamentation including a lace infill over the arched verandah entrance, and lace balustrade, was possibly built by owner Neilson, a carpenter. After the house was built, however, Neilson took up a career as a toy maker, one of very few in Brisbane at the time. He continued to ply this trade until 1937.

The Neilson house continued to be one of only two residences listed on Stanley Street East until 1912. The unpopularity of the area allowed the Neilsons to add to the size of their property as neighbouring allotments were offered for sale, refining the site to its current size by 1946. After Annie Neilson’s death in 1949, the property passed to her husband Anthony, and then to their son when Anthony died in 1956. The family retained ownership of the property until 1971, when it was sold to a new owner. The house continues to be used as a residence.

as a family residence built circa 1897 in the Stanley Bridge Estate in Coorparoo, when it was still a predominantly undeveloped area.

as one of the few surviving nineteenth century residences left in Coorparoo.