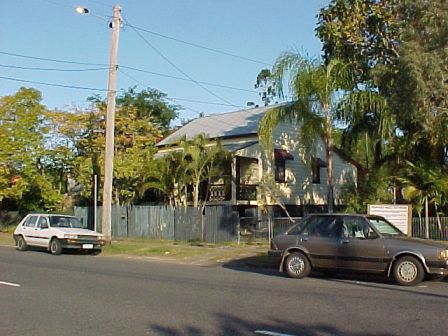 This modest timber and tin cottage was constructed circa 1894 for German migrant Wilhelm Mecklenburg. The property has remained in use as a private residence for more than 100 years and is a rare surviving example of a substantially intact nineteenth century residence in Coorparoo.

The land on which this residence was built was part of a purchase of crown land made by Frederick Merry, Joseph Berry Jr, William Ruddle and John Potts on 15 February 1887. The four partners bought a block described as Lot 51 in the Parish of Bulimba. Lot 51 must have been one of the last pieces of crown land to be sold within the East Brisbane/Coorparoo district. The partners subdivide into two sections and then further subdivided Section 2 into 16 perch house blocks.

In the subsequent land sale, German migrant Johannes Diefenbach bought subdivision 21. He took ownership of the block on 30 April 1888. Diefenbach held onto the vacant block for only four years, before disposing of it to fellow German, Wilhelm Meckelburg (also spelt Mecklenburg) on 26 July 1893. Meckelburg mortgaged the land through a ₤40 loan arranged with Peter Fosteron 2 August 1893. It is possible that this loan, which was repayable on 1 July 1895, was used by Meckelburg to fund the building of his residence in Temple Street. The first mention of a Mecklenburg living in Temple Street is in the 1895-96 edition of the Queensland Post Office Directories. As the information for this annual directory was compiled during the year prior to publication, then it can be assumed that the house at 149 Temple Street was built during 1894.

Just two days after the outbreak of the First World War, on 6 August 1914, Meckelburg died. His house and land passed to his widow Rosa Anna Meckelburg. When Rosa died on 18 March 1921, the property was inherited by Friederick Max Meckelburg. The property passed briefly from the hand s of the Meckelburg family on 17 February 1930, when it was sold to William Wendland. Wendland had little influence over the residence at 149 Temple Street, for he died on 8 September 1930.  Louisa Anna Meckelburg acquired the family home on 5 March 1931. After her death on 26 July 1943, her estate passed to the control of the state Public Curator’s Office.

On 24 September 1944, Martin John Burke bought 149 Temple Street from the state government. His control of the property was only short-lived for Burke died on 5 August 1950. His widow, Martha Annie Burke became the sole owner but within three years, she disposed of Meckelburg’s house. On 27 October 1953, Arthur Milligean and his wife Lily Violet May Milligean became the new owners of this house and land. On the settlement date, the Milligeans mortgaged their purchase through Martha Burke. It is assumed then that she loaned the Milligeans the money they needed to buy her property.

The Milligeans bought 149 Temple Street as an investment property but they quickly disposed of it to Sylvia Maude Woodhouse. Woodhouse took ownership on 9 December 1953, held the property for five years before selling it to Jane Alice Hacking. After Hacking’s death on 4 April 1975, the old house passed to her son Walter. Timothy Maurice Collins, using a loan from the Bank of New South Wales (Now Westpac), bought the property from Hacking on 4 July 1977. Collins, in turn, disposed of the property to Bethwyn Rosemary Humphrey on 7 July 1980. They mortgaged the property twice before transferring ownership to Jacqueline Doris Pettigrew and Neville Stuart Pettigrew on 18 November 1988. During their two years as owners, the Pettigrews took out two mortgages on the house and land. Peter Anderson McGlasson and Maxine Kinbacker became the new owners on 16 January 1991. Again utilising its investment potential, they mortgaged it twice before selling the property to Hedley Christopher Thomas on 17 February 1992. The current owners, Paul Alan Whittaker and Katie Diana Whittaker, took control of 149 Temple Street on 30 June 1999. This former residence of the Meckelburg Family, is one of the few surviving nineteenth century buildings left in Coorparoo.

as an 1894 residence built in Coorparoo for a German migrant tradesman.

as one of the few surviving nineteenth century residences left in Coorparoo.