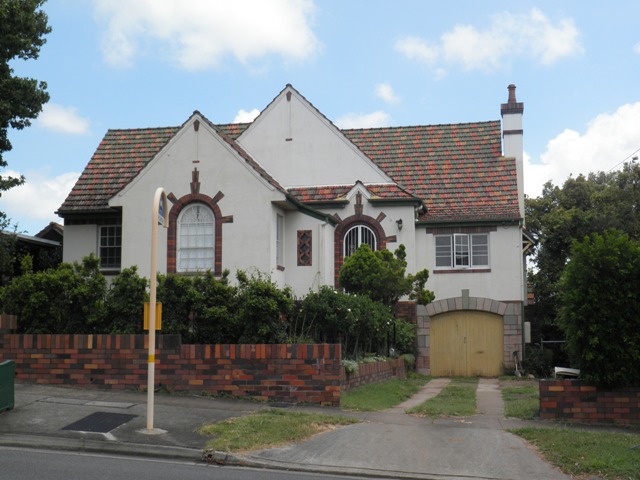 This fine Old English style residence, designed by architects Chambers and Ford, was built for Reginald and Grace Bayard in 1938. Reginald Bayard was the son of the founder of Bayards Pty Ltd and was Managing Director when he died in this house in 1953. It is one of the attractive residences built in modern architectural styles which were being constructed in the Coorparoo-Greenslopes area as the large estates surrounding fine homes were subdivided and sold in the interwar period.

This fine Old English residence is built on land that was formerly the tennis court of the large residence next door at 80 Chatsworth Rd. It is one of a number of attractive modern interwar residences built on large subdivisions in the area.

The land for the Bayard Residence was subdivided and sold from the holding of 80 Chatsworth Road in March 1938. ‘De-Aar’, the house at 80 Chatsworth Rd, was built in 1915 for the son-in-law and daughter of George Charles Windsor Willcocks who had owned just over an acre of land on the corner of Chatsworth Road and Upper Cornwall Street since 1890. De-Aar was a fine residence which in 1935 also contained a tennis court that became part of 437 Upper Cornwall Street.

Following the death of George Willcocks in 1916, the property passed to his sons Robert James Willcocks and George Charles Willcocks, the latter of whom was an estate agent with offices in Adelaide Street in the City. In 1937 the land was subdivided with one quarter acre lot sold then and this lot, resub 3 of also just over quarter of an acre, sold in 1938.

In the interwar period the Greenslopes-Coorparoo area was undergoing significant residential development, and many estates in the locality were subdivided into residential allotments as the population increased. The opening of the tramline in 1914 along Logan and Chatsworth Roads made the region attractive as a residential area. This was encouraged further by the extension of this line in 1926 south to Holland Park. A feature of Greenslopes’ development was that large blocks near the tops of hills, intermingled with smaller allotments on lower land. The former were selected by wealthier middle class families and investors for large luxury homes. To this day the suburb is characterised by large fine homes on significantly sized blocks, overlooking smaller ones which form the majority of the residential topography.

A 1936 article in the Courier Mail, noted the modern architecture appearing in the rapidly developing suburbs of Coorparoo, Holland Park, Greenslopes and Camp Hill:

Four suburbs – Coorparoo, Camp Hill, Greenslopes and Holland Park – by reason of their topographical relationship and their grouping in Brisbane’s tramway system, possess a community of interest. Being within easy distance of the city, yet far removed from its bustle, these suburbs are increasingly attracting the interest of the builders of new homes.

In this part of Brisbane, fortunately, the conventional idea of house-building of 10 or 20 years ago has been forgotten, and in the process of applying original ideas, the people have adopted styles that might well become a pattern in subtropical suburbs. There has been a boldness in conceptions of home design, a generosity in building itself, and more than a little inspiration in artistic ideas.

The new lot was purchased in February 1938 by Grace Elizabeth Bayard, the wife of Reginald Arthur Bayard. R. Bayard applied for approval to build a new dwelling, designed by architects Chambers & Ford to be constructed by A.H. Gregory of Nundah on the property on 27 February.

Chambers and Ford was the partnership of Claude William Chambers (1861-1947) with E. M. Ford established in 1920 and continued in name until 1951, despite Chambers’ retirement in 1935. Claude Chambers was a prominent Brisbane architect in the early 20th century, particularly noted for his fine commercial buildings such as the Finney Isles Building (1909-10) and Perry House (with Lange Powell in 1910). However, Chambers worked mostly in Sydney for much of his partnership with Ford, leaving Ford to manage the Brisbane firm.  The firm was responsible for several Brisbane homes in the newer Interwar styles, such as the Californian Bungalow and Old English style.

Chambers & Ford had a previous connection with the Bayard family having designed a distinctive and decorative Californian Bungalow for Henry Bayard in 1925. Henry Bayard was Reginald Bayard’s older brother who managed the Bayard Ipswich store until his death in 1953.1

Reginald Bayard was the third of the “four capable sons” who managed the company “Bayards’ Ltd” - a business founded in 1893 by Mr George Arthur Bayard (d.1933). By 1924 Bayard and Company, General Drapers and Manufacturers was recognised as one of the foremost drapery houses in Brisbane. Testament to their success was their four-storey building in South Brisbane with modern innovations such as a “fast elevator service and modern cash tube service”. The building’s “huge sixteen window frontage backed by the sterling policy of the firm to offer for sale only the best and newest in imported and Australian-made merchandise” ensured that “Bayards’ will always be a busy business centre”.1

George Bayards’ entrepreneurial flair resulted in the opening of more stores in Nambour, Wynnum and Ipswich. The more prestigious Queen Street store opened in 1939 after the company purchased ‘Hartley’s Building” and the firm’s store in Melbourne St, South Brisbane closed.1 The Bayard company suffered during World War Two and the postwar years, finally going into voluntary liquidation in February 1981. The firm had traded for 99 years, but fell victim to changing buying patterns and drive-in shopping centres. The slow demise of the Bayard business followed the deaths of the two Bayard men. Henry George Bayard, 65 and Reginald Bayard, 59 both died in 1953.1 On 5 August 1953, the Courier-Mail reported that Reginald Arthur Bayard, managing director of Bayards Pty Ltd, Queen Street, was found dead in a room beneath his house in Upper Cornwall Street, Greenslopes. He had been in ill-health.1

The home of Mrs Reginald Bayard in Cornwall Street was featured in the “Beautiful Queensland Homes” series in The Steering Wheel and Society & Home magazine on 1 December 1938. Erected on the heights of Greenslopes the house was noted for its beautiful views and artistic colour scheme: “gaily coloured bricks surmounted by plain white walls, relieved by green shutters and brick arches”. The house had stone work around the doors and windows with walnut doors and bevelled plate glass in the “large and numerous windows”.  The roof was “somewhat unique” in Brisbane with “the tiles being mainly of a green tint interspersed with reds and browns.” The interiors featured heavy textured cream wallpaper to the ceiling “in accord with modern practice”. There was a “low and heavily carved bookcase beneath one of the windows” which, with the rich velour hangings and tapestry lounge, would give guests a “gracious welcome”. The kitchen was “the last word in efficiency with a built-in refrigerator and hot water system” There was a fernery built of heavy timber and a double garage formed “an integral part of the house itself”.1

Not long after the tragic death of Reginald Bayard at the house in 1953, ownership was transferred to Cecil Bertram Knoblauch in mid 1959.The house remained in Knoblauch family until 2008.

as a fine residence of modern design built on a subdivision of the large estate of an earlier residence in the interwar period.

as an example of a detached residence designed by notable interwar architects Chambers & Ford, who are more commonly associated with modern interwar apartments.

as a house built for, and lived and died in by the Managing Director and son of the founder of the Bayard family company, Reginald Bayard. 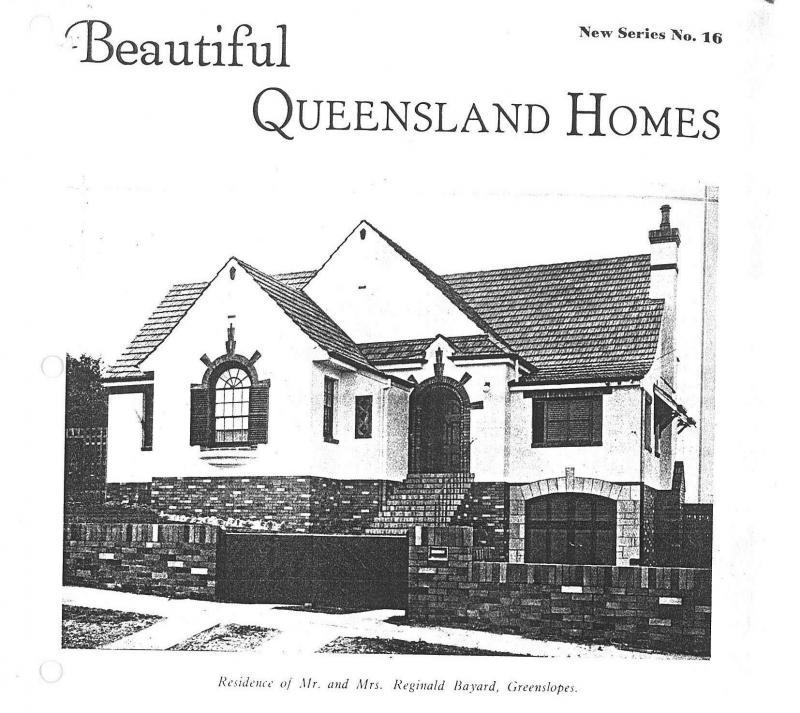