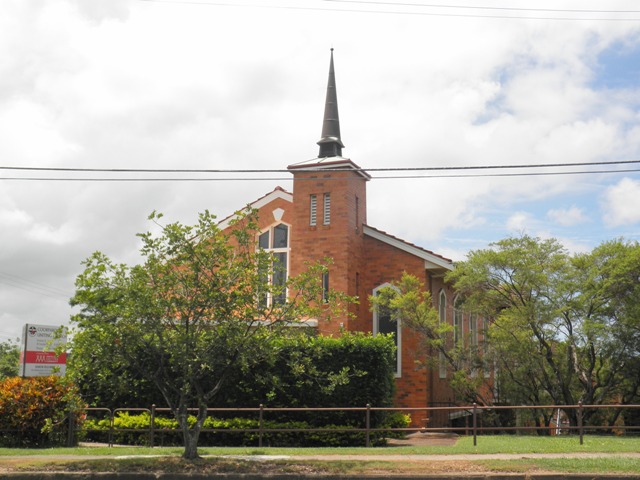 This postwar Ecclesiastical style brick church was constructed in 1952 to the design of Alex Trewern and was the second Methodist church to be built on the site. The original church, which was the first in Coorparoo, was constructed in 1886 but was disassembled in the early 1950s to make way for the new church. The timber hall, situated behind the current church, was constructed in 1914 and extended in 1919 and displays a World War I memorial inside. In 1977, when the Congregational, Methodist and Presbyterian Churches joined together to form the Uniting Church, the church was renamed the Coorparoo Uniting Church. A brick manse was built on the site in 1972 but is not included in this heritage listing. It replaced the original 1906 timber manse.

Although Coorparoo land sales occurred from 1856, development was slow with farmers and land speculators buying land at the early sales. It was not until the mid 1870s that the population growth and the number of children living in this rural area led to the agitation for a school that opened its doors in January 1876. Coorparoo developed like other Brisbane suburbs with the wealthy establishing large houses on the hill tops and ribbon urban growth along transport corridors. By the 1890s the area included a socio-economic mix that ranged from farmers to politicians like Frederick Brentnall MLC, Water Henry Barnes MLA, business men such as Nathaniel Lade, James Hipwood and Reuben Nicklin and important public servants such as Edward Deshon and TW Connah.

Many of the Coorparoo residents were Wesleyan Methodists who wanted a church in their locality. On 24 September 1885 the Queensland Chairman of the Wesleyan Methodist Church and four men met to form the Coorparoo Wesleyan Church. These were John Potts, a real estate entrepreneur, the former Wesleyan minister Frederick Thomas Brentnall, Nathaniel Lade the Methodist Supervisor of Sunday Schools, and John Smith Bennet. These men and Edward Campbell were appointed the first Trustees. Within weeks the South Brisbane Circuit had acquired four allotments in the recently subdivided Durham Estate, Portion 116. The land was vested in the Coorparoo Trustees with Brentnall and Lade responsible for obtaining designs for the proposed church. The 2nd structure on Durham Estate was the Wesleyan Methodist Church, and it is the oldest ecclesiastical building in Coorparoo.

The Trustees wanted to make a statement, hence their employment of AB Wilson as the architect. The builder was Mr Gillies and the total cost of the new church was £1106. A beautiful timber building was built on the corner of Cavendish Road and York Street and it is described in the Brisbane Courier, of 14 June 1886. The opening services took place on 13, 20 and 27 June 1886. The church was extended by enlarging the coir and the vestry at the rear (after 1902), while the original spire was removed.

The first manse was built in 1906 and renovated over the years. An imposing new brick minister’s residence erected in 1972 was built on the site of the original manse and on part of the tennis court.

In 1902, renovations to the Church for the Sunday School were required. The Trustees again chose a renowned architect, local Coorparoo resident Henry Wallace Atkinson. The steady growth in Coorparoo’s population led to the building of a new church hall for Sunday School, meetings, concerts, social activities and other church purposes. The stump capping day for this hall was 18 July 1914. AB Wilson was the architect for Church renovations at this time, so he was possibly the architect responsible for the hall.

Additions were made to the rear of the hall in 1919. A basement room was built and the hall extended to incorporate a long room and platform that could be used as a stage. This extension was used as a kindergarten and folding doors separated it from the main hall. Charlotte Brentnall, daughter of a founding Trustee FT Brentnall, suggested that the extension be a war memorial. A large bronze honour roll hangs on the wall, unveiled in 1919, a gift of the William Nicklin’s of Shakespeare Street and designed by JW Caldecoat.

The hall could seat 300 to 400 people. The hall provided a venue for the library and Sunday School and a meeting place for church groups and committees, while the platform enabled its use for other social purposes. The Methodist faith required commitment with members expected to be active participants, attending not only church services but teaching Sunday School, helping with suppers, singing with the choir, membership of prayer groups and other church activities. The church offered not just the solace of faith, but also diverse social activities such as meetings, teas, concerts, excursions and education.

The 1936 Jubilee celebrations saw the establishment of a fund for a new brick church. The continuing growth in Coorparoo’s population resulted in the new brick church, which was built around the old timber one and opened in 1959. The new church cost £17,760, the architect was Coorparoo resident and a member of the church, Alex Trewern, while the builder was G Heuston. After completion of the brick church, the old timber church was disassembled and provided the fabric for a new church at Carina.

The Coorparoo Circuit was responsible for advancing Methodism in the district and encouraging the building of other Methodist Churches. The first churches were at Camp Hill and Holland Park, and the circuit subsequently extended out to Mt Gravatt. In 1957 the Coorparoo Circuit’s growth required the forming of two new circuits with the Coorparoo Circuit retaining the churches at Coorparoo, Thompson Estate, Camp Hill and Belmont. Church membership peaked in 1964 with 345 members. During the 1970s Coorparoo started changing from a suburb of family homes to a mix of homes and units, resulting in declining numbers and the Coorparoo Methodist Church joined the ecumenical movement to become a Uniting church in June 1977. Though church membership may have declined the Christian spirit has led to a large seniors group composed of members from various denominations. The Senior Fellowship meets regularly and social activities include talks, outings.

The first church built in the area was the Coorparoo Wesleyan Methodist Church in Cavendish Road. The Baptists acquired land, in what had been Stanley Bridge Estate, in 1910. Catholic parishioners had to walk, ride or a=catch a tram to Kangaroo Point until 1913 when Archbishop Duhig established his first suburban parish, Coorparoo with the dedication of St James on Old Cleveland Road and by 1980 there were four Catholic churches in the suburb. Coorparoo Anglicans had to go beyond the shire boundaries to Thompson Estate until 1922, when St Stephens on the corner of Cavendish and Chatsworth Road was dedicated. The Presbyterians held services in a variety of places until their hall was built. This place is not only the site of the oldest church in the district, but the Methodist Church was the only one Coorparoo church until the 1910s.

The church and hall occupy a prominent site on Cavendish Road with the church on the corner with York Street.

The church is of two storey brick construction with a gabled terracotta roof. It is rectilinear in form with a crossing. There is a tower at the front (the north elevation) with a sheet metal spire and an apse at the rear (the south) with a wide pan metal roof. The porch on the north east corner is detailed in brick and sandstone with a near flat roof. The lower level was presumably the kindergarten completed as the first stage and the upper level is the church, completed second. However the two parts are visually integrated and clearly part of the same design. The sloping ground allows entry from the street corner to the upper level via steps and terracing carefully detailed in the same brick as the church. The steel balustrading is probably original as well as many of the trees along Cavendish Road.

The building is well articulated in a post war ecclesiastical style with Gothic references like the overall vertical emphasis and the use of buttresses and windows with pointed heads. The church windows are steel framed with cement dressings forming decorative architraves externally reminiscent of the timber architraves on the adjacent hall. Some windows are stained glass. The interior was not inspected, but from outside appears to be plain plaster with a face brick dado and a polished timber floor. The pews of slatted timber of a pale colour are probably original.

The hall stands next to the church fronting onto Cavendish road. The tubular metal fence in front of the church extends on past the hall. The hall is high set timber, lined with chamfer board outside and with a corrugated iron roof. The roof is gabled with wide barges and simple battened infill typical of the period. There is a small porch at the front with similar detailing.

The joinery is mostly intact with paired windows surrounded by timber architraves outside placed symmetrically. The rear extension is roofed separately with a gabled hip roof joined to the main roof.
The interior was not inspected but the front part can be seen from the window. This is lined with tongue and groove boards with a dado rail and with lattice vents in the ceiling. The steel cords of the trusses are exposed.

The manse, built plainly of brick, stands behind the church. There is a small utilitarian timber shed behind the hall.

as the church and hall demonstrate the strong presence of the Methodist community in the local area since the 1880s and, in particular, the population growth during the interwar period which necessitated the construction of a new church.

as a site of worship for the local Methodist and Uniting Church congregations since 1882.