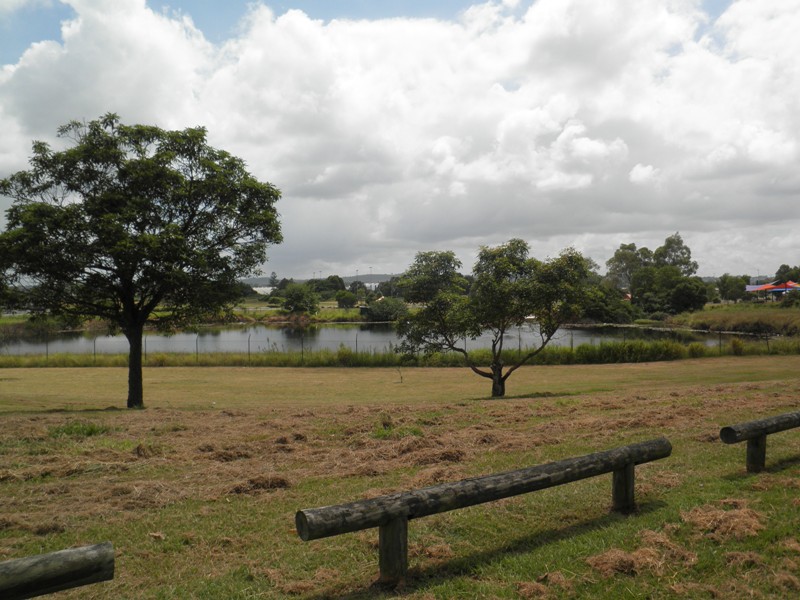 The former bluestone quarry operated from 1913 to the 1920s, when Acacia Ridge was still a predominantly rural suburb. During World War II, a concrete air raid shelter was constructed in the former quarry to provide protection for personnel at the adjacent Archerfield Aerodrome from Japanese air raids. After the War, underground springs filled the quarry and it served the local community as a swimming hole until the late 1960s when it was fenced off. A contentious salvage operation in 1992 saw the recovery of some military aircraft and equipment which had been dumped in the quarry at the end of World War II, demonstrating the potential of the site to inform on the important role and history of Archerfield during the War.

This former quarry in Mortimer Road Park, now a waterhole, is a well known landmark among local residents of the Archerfield area and is also a prominent landmark for pilots approaching the adjacent Archerfield Airport. The waterhole was originally a bluestone quarry which operated between 1913 and the 1920s. A private railway siding from the Beenleigh line was built in 1913 to service the Brisbane Blue Metal Company quarry. The siding ran for more than 2 miles from south of Rocklea Station parallel to the main line and then south along the eastern side of Beatty Road. A regular goods train serviced the siding, augmented during busy periods with special daily shunt trains. This line was in use for less than 10 years. It is thought that blue metal from the quarry was supplied to the railways. After the quarry ceased to be operational, other local industries were permitted to use the siding, for example Mr Abercrombie who used the siding to transport logs.

One former resident of Sunnybank, now 90 years of age, remembers the quarry being worked in the 1920s, recalling ‘...when we saw it at first trucks were taking stone from the lower part until they got down to water table [sic] and flooded it’. According to this resident, a second quarry was then opened on Beatty Road towards the bridge over Oxley Creek and a third quarry established on Bowhill Road in what is now Willawong.

During World War II, Archerfield Aerodrome provided an important base for Australian, American, British, and Dutch air forces. Archerfield was also used to service military aircraft and for training purposes. The five large igloo shaped hangars immediately to the north of Mortimer Park provide a reminder of the strategic importance of Archerfield during the war. Wartime eye witnesses and local veterans have claimed that military aircraft were dumped in the Mortimer Road waterhole after the cessation of hostilities in World War II, a claim which was later substantiated by a salvage operation.

A personnel air raid shelter is located in the northern face of the former quarry. This was presumably constructed during the war to provide emergency protection in the event of an air raid for military personnel stationed at the aerodrome and surrounding area. A plan dated November 1942 shows that the water level was then below the position of the air raid shelter. It is possible that the air raid shelter is the same as that noted in Allied Works Council minutes of January 1943 which refer to a bomb proof reinforced concrete building constructed for the US Aircorps Operations HQ. The 1942 plan also shows zigzag slit trenches next to the quarry. A later plan refers to the air raid shelter as an “operational building”. No plans relating to the construction of the shelter in the former quarry have yet been located. Whether the building was ever actually used, and for what purpose, is not known at present. There is no evidence to date that the popular local rumour about a system of underground tunnels leading from the air raid shelter to the igloos or elsewhere has any substance.

The former Archerfield quarry is not only well known to local residents as the source of rumours of wartime tunnels. It has also been used by many locals as a swimming hole. According to a longtime resident of Sunnybank, the old quarry was used by Runcorn State School for swimming, including swimming carnivals. Another school with associations with the former quarry is the Acacia Ridge State School, which has since moved to the Acacia Ridge High School site in Nyngan Street. The school’s centenary history records:

A railway line ran from near the Nyanda crossing to Carr’s Quarry from which blue metal was dug. When this work was abandoned, the quarry filled with water and it became quite a famous swimming hole, both for the school and the district. One past student remembers Mr Freney sitting on the bank with a tube tied to a rope ready to drag out anyone who floundered during school swimming “lessons”. This is significant in that it draws attention to the fact that later this year, we hope to see the opening of our centenary swimming pool. A far cry from Carr’s quarry.

In 1963, the Brisbane City Council purchased the site of the quarry and over 50 acres of the surrounding land from the Commonwealth for park and recreation purposes at a price of £17,750. A further 809 m² was acquired from H.J. Brittain and D. Brittain for $34,000. This brought the total park area to 20.838 hectares. The approximate surface area of the flooded quarry is 6700 m² and the exact depth of the quarry is unknown although it is allegedly 40 feet deep in some places. In response to lobbying from the Archerfield-Acacia Ridge Progress Association in 1968-69, the Council decided to fully fence the disused quarry for safety reasons, particularly the risk posed to children. ‘No Swimming’ signs were also erected at this time, bringing to an end another chapter in the history of the quarry.

Since the 1960s, parts of the park have been leased to various community groups and sporting associations including the Australian Boy Scouts association, the Acacia Ridge Junior Soccer Club, the Qld Soccer Federation and the Acacia Ridge Football Club. Four clubhouses have been built on the site. The quarry has been used by the Queensland Police Department as a training ground for police divers during the 1970s and as a source of irrigation water for nearby sporting fields.

In 1992, permission was given by the Brisbane City Council for a drainage and salvage operation at the waterhole by a group of military historians. An earlier request from a different party to salvage dumped equipment from the quarry in 1977 was refused by Council. Military equipment recovered in 1992 included ammunition,  engine and other parts from various wartime planes including Wirraways, Mosquitos and Dakotas, dozens of Thompson and Browning machine guns used by aircraft and the remains of two Gypsy Moths which collided over Archerfield on 18 June 1937. In November 1992, the salvage operation was closed down by the Brisbane City Council due to concerns regarding safety and other issues. According to one newspaper report, more than 45 million litres of water was pumped from the waterhole during the salvage operation. Since this time, the quarry has refilled with water and has been securely fenced to prevent public access.

A plan for the future landscaping of the park is currently being prepared and it is envisaged that both the historical significance of the quarry and the view to the north of the 5 World War II igloo hangars in Kerry Road will be respected. Brisbane City Council is planning to make a water feature of the quarry which may be used for recreational purposes such as model boats. Plans for the development of the park are being prepared in consultation with members of the local community.

as the site of a World War II air raid shelter; and, as a site that was used to dump military aircraft and equipment at the end of the Second World War.