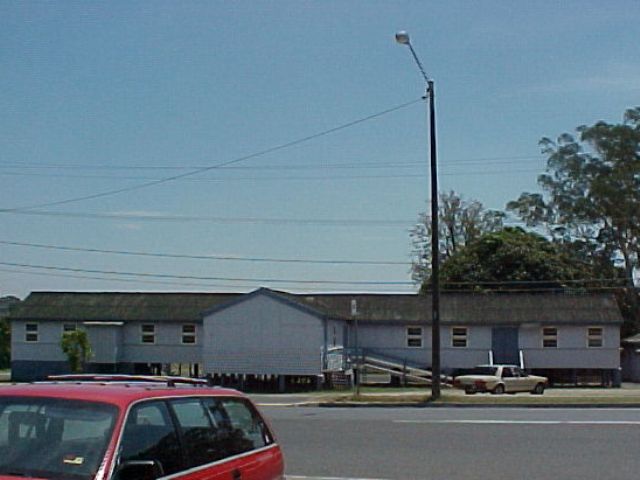 This timber and fibro hall was erected circa 1948 as a temporary church and school for the Acacia Ridge Catholic community. It was reportedly built from three relocated World War II army huts, probably from the nearby military camp at the Archerfield Aerodrome on the corner of Beatty and Mortimer Roads.

This hall provides evidence of the desire of the Catholic community of the Acacia Ridge area to establish a local church after World War II. Although the parish of Acacia Ridge was not created until 1967 when it was divided from the parish of Moorooka, a Catholic church was established here as Our Lady of Fatima in around 1948, under the care of the Rev. James Flanagan.  The first parish priest was Father Ganzer, formerly an RAAF chaplain.

Prior to the erection of a modern brick church in 1966, the present church hall was used as a church and school by the local Catholic community for nearly 20 years. Local residents claim that the hall is constructed from three army huts, probably moved from the military camp at Archerfield Airfield (corner Beatty and Mortimer Roads) after the conclusion of World War II and placed on 11 acres of land near the junction of Beaudesert and Mortimer Roads. The huts are likely to have been barracks buildings.

A dilapidated house that was also on the site became the presbytery. As well as providing a church, the timber and fibro buildings also served as a temporary school for around 100 children taught by Sisters of Joseph from St. Joseph’s of Moorooka. A new school complex for Our Lady of Fatima was later built in 1971.

The church hall building continues to serve the Catholic and wider local community as a hall. It provides evidence of the commitment of the local Catholic population and the Church to providing a place of worship and religious education for parishioners in the Acacia Ridge district in the post-war period.

The building features three wings configured in a ‘T-shape’ and raised a half level above the ground. The materials used are timber stumps and weatherboarded balustrade areas, topped by fibre-cement panelled walls with semi-circular coverbeads over the sheet joints. The roof is clad in corrugated fibre cement sheeting and the windows are awning hoppers set in pairs.

as an example of the reuse of World War II army buildings to meet the needs of the growing local population in the immediate post-war period when building materials were in short supply.

for the part it has played in the lives of the local Catholic community as a 'temporary' church and school from the 1940s to the 1960s and as a hall since the 1960s.