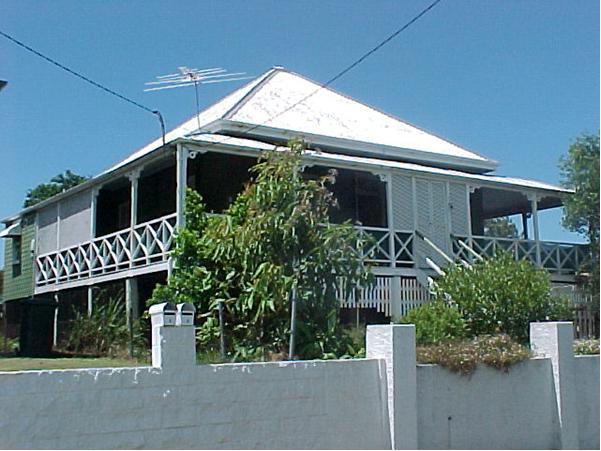 This simple but elegant timber house is believed to have been built in the 1880s for Alexander Barron, a dairy farmer, and his wife, Amelia. The Barrons were one of the first European families to settle in what was to become Gordon Park and appear to have lived on the property from at least the late 1860s, although in a different house. The family, who also ran a dairy farm on the property, owned the land until 1917 when it was sold to developers and later subdivided. This substantially intact house survives as one of, if not the oldest, houses in Gordon Park.

In 1857, portion 6 of 83 acres was granted to Alexander Barron who had emigrated from Scotland with his wife, Amelia. This large parcel of land was bounded on the eastern side by Kedron Brook. The northern boundary was a road that became known as Happy Valley Road, and later, as Stafford Road.

Electoral rolls for the late 1860s record an Alexander Barron, freeholder, of “Kedron Brook”. This suggests that Alexander Barron was at this time living on his property where he established a dairy. His children reportedly attended first the Normal School in the city before changing to the Bowen Bridge Road School after it opened in 1865. The location of any earlier residences on the property is not known.

Information regarding the history of 29 Jack Street and the Barron family has been passed down to family members and subsequent owners.  According to one previous owner, this residence was built during the 1880s by the Barrons themselves, using timber which grew abundantly in the surrounding bushland, including silkyoak, cedar and pine. They named the house Forresville after Forres, their home in Scotland. Nearby streets are named Barron Street and Little Barron Street after the family.

After the death of Alexander Barron in 1872, allegedly from tetanus, the family dairy was taken over by the eldest son, John. By the 1880s, another son, James, had established a blacksmith’s business on the corner of Stafford Rd and Gympie Rd. In 1892, some 6 acres of the property to the south were transferred to George Barron, another son of Alexander and Amelia.  John Alexander’s widow, Amelia, died in 1916, reportedly from a redback spider’s bite.

In 1917, the Barrons’ property was sold to developers Isles, Love and Co. who subdivided the land from 1920 for residential development. Three lots including the house at 29 Jack Street were purchased in 1923 by Daniel Martin who resided in the house until at least the 1940s. Information about the house passed down from the Martins to subsequent owners included that the area used to be a swamp and that Little Barron Road was cut into two sections by Stafford Road. During the 1920s, the Martins used horses and carts to turn the house which originally faced Kedron Brook. In its new position, the house now faced the newly constructed Jack Street. According to the Martins, stumps from the local Bowls Club were used for the house.

The house was purchased by Stephen and Alexandra Harrison in 1981. They renovated the house and opened the verandahs that had previously been enclosed. The house has retained its double hung windows onto the verandahs that wrap around three sides of the house. Other features include beaded tongue and groove walls, a separate bull nosed verandah roof and single skin walls.

The present owners obtained the house in October 1998 and have continued to maintain the house with much respect for its heritage value.

as one of the earliest surviving dwellings in Gordon Park, providing evidence of the area's farming heritage.

as a rare example of a nineteenth century residence in Gordon Park.

as the former home of the Barron family who were among the earliest European settlers in the area.