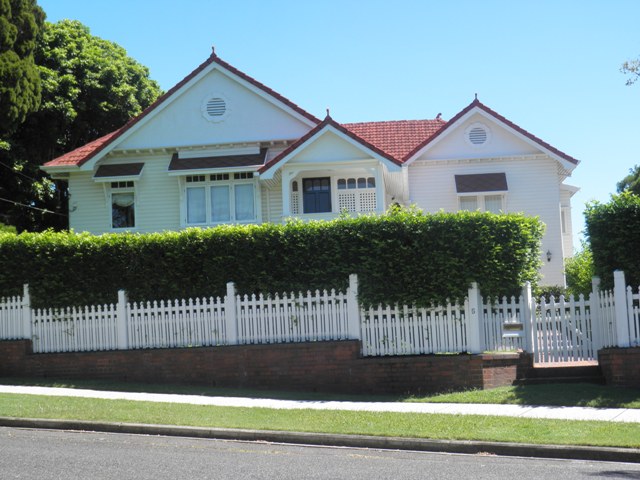 Roger William Hercules Hawken, a lecturer in civil engineering at the University of Queensland, acquired this property in October 1915. In 1916 he engaged eminent Brisbane architect Alexander Brown Wilson to design a family residence on the site. The house was completed in 1917 and named ‘Bentong’, probably after the town and district in the Malay States where Hawken had previously worked. Roger Hawken was appointed Professor of Engineering at UQ in 1919, and to the Senate of the University. He was on staff at UQ for thirty-five years, and both the Engineering Building and a main access road to the university bear his name.

Although some European settlement had occurred in Albion in the 1850s, and the racecourse at Ascot drew crowds from the 1860s, the Petrie Estate was undeveloped until the twentieth century. The twenty-acre site operated as John Petrie’s Albion brickyards from 1858 until the 1890s, when the Petrie family lost ownership. Residential growth had accelerated in the surrounding area, making the Petrie Estate attractive for development. Sales of the estate began in 1903, with advertisements emphasising the proximity of transport, water and gas services. The area was also well-elevated, situated near the peak of what was then called Albion Heights.

Residential development followed slowly. From 1905 Kidston Street became home to well-to-do professionals, including an engineer, architect, accountant, living in architect-designed houses and a builder and printer. The street was variously referred to as being part of Hamilton, Clayfield, Albion, Albion Park and Albion Heights, though surprisingly, not Ascot.

Amongst the new inhabitants of the growing suburb were academic professionals. Queensland’s first university was established in December 1909, to coincide with the jubilee of Queensland’s establishment. Lecturers for the first four faculties were drawn from around Australia and England, and many commissioned substantial homes in newly-accessible areas like the Petrie Estate. Percy Weston, an engineering lecturer, resided in ‘Arden’ at 11 Kidston Street (built 1912-13); and mathematics lecturer Sydney Lusby had ‘Trevecca’ built in Palm Avenue in 1915. The area was not particularly close to the university, which was then operating from Old Government House, but the area was appealing, being ‘one of the most favourably situated sites in Brisbane, commanding as it does extensive views of bay, river and mountains’.1 The nearby Clayfield tramline provided convenient transport to the university.

In October 1912, Sydney University lecturer Roger Hawken was engaged as the university’s first civil engineering lecturer. Arriving in Brisbane from Sydney, Hawken and his family resided in a series of rental properties before Hawken purchased an allotment of land in Kidston Street, in October 1915.

Hawken engaged eminent architect Alexander Brown Wilson to design his family residence. Wilson was one of Brisbane’s most prominent architects of the nineteenth and twentieth centuries. He designed numerous residences, commercial buildings and churches for a wide variety of Brisbane clients between 1884 and 1928. His residential designs included several major Brisbane landmarks like the Hayne residence (later Como) in 1889-90 [QHR 601474], Lamb residence, Kangaroo Point (1901) [QHR 600242] and Glenugie in New Farm (1885) [QHR 600262]. He also designed the adjacent house for Hawken’s colleague, Percy Weston, in 1912. In his private life, Wilson was involved in civic matters, serving as Chairman of the Stephens Divisional Board from 1890 to 1891. In 1921 he was engaged alongside Hawken on a committee to decide a future site for the University of Queensland. After his retirement in 1928 his son Ronald Martin Wilson took over his architectural practice.

The house which Wilson designed for the Hawkens was a multi-gabled bungalow which took advantage of its elevated site. The interior of the four bedroom house featured silky oak panelling, twelve foot ceilings, arched bay windows with leadlight fanlights, arches and alcoves.

Hawken, his wife Adelaide and their five daughters took up residence in the house in 1917. They named the house ‘Bentong’, apparently a reference to the town and district in the Malay States where Hawken had previously worked. By that time Hawken was working as the de facto professor of engineering at the university in place of Professor AJ Gibson, who had been called up to serve in World War I. On his return Gibson resigned, and Hawken was appointed to the position in 1919. The establishment of a university in Brisbane was still controversial at that time, so academic staff engaged in public life to demonstrate the university’s valuable contribution to Brisbane and Queensland. Hawken was no exception. He co-founded the Institute of Engineers, Australia in the same year as his professorial appointment, and served as its president in 1923. The Queensland Government engaged him on a number of investigations, including a commission into cross-river facilities for Brisbane alongside Ronald Wilson, and accepted Hawken’s proposal for a compulsory register of engineers. In addition to university lectures, he gave a series of public lectures on financial and common sense in engineering in 1928.

In 1936 Hawken sold a 16.23 perch parcel fronting Barlow Street from the site, as the suburb’s residential settlement intensified. The following year he purchased ‘Dahlow’, the house next door on the corner of Kidston and Barlow Streets, and converted it to flats.

Hawken died at Bentong in 1947, shortly after his retirement. Bentong passed to his family, who divided the house into two apartments in 1949. Adelaide and three of the Hawken daughters lived in the apartments, retaining the house until 1993. It was sold to its current owners in 2013.

as it demonstrates the residential growth of this part of Ascot in the early twentieth century.

as the place demonstrates an elegant and well-composed aesthetic. The detached timber-framed and -clad residence, with its characteristic triple gabled roof, stands in a generous garden on a rise within a leafy suburban landscape and is notable for its fine craftsmanship and composition. It features a skilful arrangement of informal and formal living spaces and a sense of sophisticated suburban domesticity is engendered by its generous garden, verandahs and spacious, impressive living rooms.

as the home built and designed for civil engineer and university professor Roger Hawken. It also has a special association with eminent architect Alexander Brown Wilson.