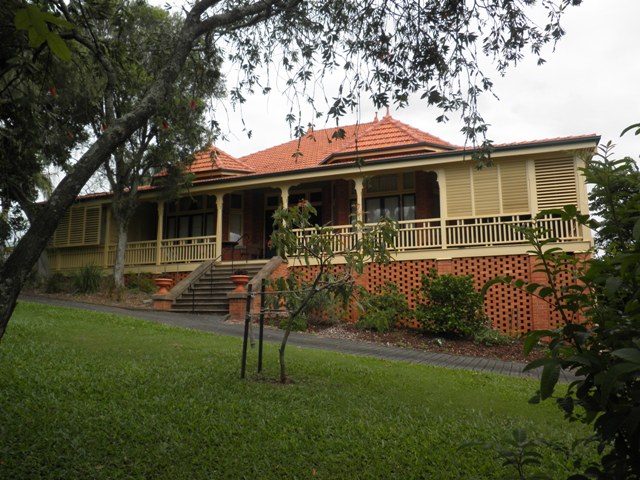 This house, constructed in 1915 for David and Ethel Tait, provides physical evidence of the distinctive pattern of development in the Greenslopes area in the early part of the twentieth century. This development was characterised by small, modest homes on small blocks and more substantial middle class homes on large allotments. Development was also shaped by the construction of a tramline to the city in 1914. This house, known as ‘De Aar’, was the residence of the son-in-law and daughter of wealthy engineer and mining entrepreneur GC Willcocks. Willcocks had purchased the site in 1890 and the property remained in the family until 1959. As a large Federation style house in a garden setting that has a striking appearance when viewed from the street, it has significant aesthetic value.

This large residence, located on a very large gently sloping site in the corner of Cornwall St and Chatsworth Rd is built on stumps, almost touching the ground on its south-east side while being elevated at the other side.

The house has a multi-hipped tiled-roof with a separate encircling timber verandah. Two hipped roof extensions, over bay windows, project in front of the main pyramid roof giving the house its unusually shaped symmetrical frontage to Cornwall St.

The separate verandah roof is supported on square timber posts decorated with simple elegant brackets in the Federation Style and has a three-rail dowel balustrading. Some sections between the verandah posts are enclosed with timber louvres.

Front steps to the verandah are centrally located opposite the main entry. The front door contains an arrangement of sidelights with fanlights above.

The area under the house has been partially enclosed with brick patterning.

The house with its scale, prominent corner location and extensive grounds, has a strong presence in the street and a landmark quality.

as the house, a substantial middle class residence on a large block, provides evidence of the pattern of development of the Greenslopes area in the late nineteenth and early twentieth centuries.

as a large, intact middle class Federation home built on a sizeable block.

for its striking, unusual appearance, graceful design and landmark quality.