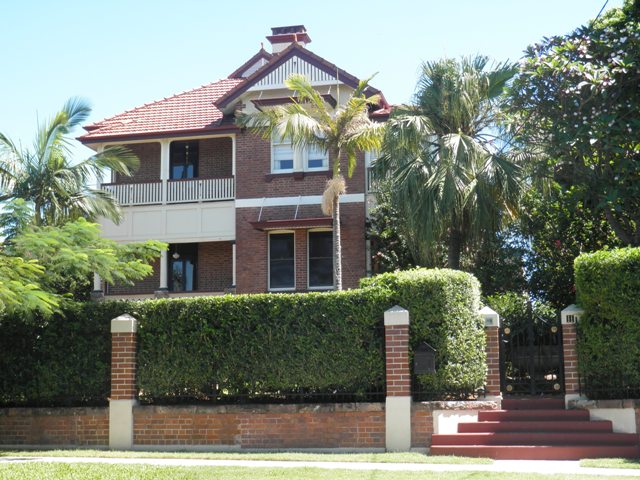 Engineer and university lecturer Percy Leonard Weston purchased this property in the fashionable Ascot area in July 1910. Eminent Brisbane architect Alexander Brown Wilson was engaged to design this substantial brick house in 1912. Weston took up residence in 1913, but died at the residence after a very short illness in August 1918, aged just 38 years old. His wife sold the property in 1919. The house was given its name, ‘Arden’, by later owners the Hemsely family, who owned the house from 1924 to 1993.

Now considered part of Ascot, Kidston Street and its surrounds were known as Albion Heights in the nineteenth and early twentieth centuries. European settlement occurred in the area from the 1850s, accelerating in the 1880s with an economic and building boom. By the twentieth century most of the original land grants had been subdivided and sold, but pockets of the suburb remained intact. Amongst these pockets was Petrie’s Brickyard, a twenty-acre industrial site in the middle of Albion Heights. Contractor and prominent settler John Petrie had purchased the allotment in 1858. The site’s geological features allowed him to run the site as a brickyard to supplement his burgeoning building business. The brickyard closed down in the mid-1890s and the Petrie family lost ownership in the late 1890s. The land was transferred to the Australian Joint Stock Bank and allotments in the estate were offered for sale from 1903. A large 89.8 perch site was sold to Henry C. Stanley in 1908, but he did not develop the site, instead offering it for sale soon afterwards.

In 1910 Stanley sold a 41.8 perch allotment to Percy Leonard Weston. Weston, an electrical engineer, was a former assistant lecturer at the University of Sydney. He had come to Brisbane in 1906 where he and A.C.F. Webb established the engineering consulting firm Webb and Weston. The firm undertook a number of early electrical installation projects in and around Brisbane, including an electrical lift in the General Post Office, electrical wiring in the Government Printing Office and the Blind, Deaf and Dumb Institute, and lighting displays in the Botanic Gardens. In addition to his business success, Weston’s academic qualifications made him a useful asset to the tertiary education facilities in Queensland. In 1909 he was temporarily engaged to teach electrical classes at the Ipswich Technical College, though Webb and Weston continued to operate. Weston commuted to the college from his home in Clayfield, where he lived with his mother Clara.

At the time of Weston’s purchase of the Kidston Street site, Albion Heights, Ascot and Hamilton were emerging as elite suburbs populated by the wealthy. The area offered several advantages. It was cooled by sea breezes and was sufficiently close to the city to make commuting to work a reality for professionals, public servants, and businessmen. Its accessibility had been improved by the Clayfield tramline, which ran along Barlow Street, and the Bartley Hill reservoir ensured a good supply of water. Working professionals responded to the appeal. Kidston Street was occupied from around 1904, and by 1910 it was home to engineers, an architect and an accountant.

Weston engaged architect Alexander Brown Wilson to design a residence for his Kidston Street property in 1912. The two men were acquainted professionally, both having worked on the construction of the Brisbane YMCA Building in 1908, and socially, as Weston attended Wilson’s ‘at home’ in 1912. Wilson was one of Brisbane’s most prominent architects of the nineteenth and twentieth centuries. He designed numerous residences, commercial buildings and churches for a wide variety of Brisbane clients between 1884 and 1928. His residential designs include several major Brisbane landmarks like the Hayne residence (later Como) in 1889-90 [QHR 601474], Lamb residence, Kangaroo Point (1901) [QHR 600242], Leckhampton in Kangaroo Point (1889) [QHR 600246] and Glenugie in New Farm (1885) [QHR 600262].

The two-storey brick house Wilson designed for Weston was not dissimilar to Leckhampton, though its features were more in line with Federation style, including multiple gables and restrained timber detailing rather than cast-iron lacework. Porphyry stone or Brisbane tuff was used in the ground level. It is possible that the stone was obtained locally, as there were quarries and brickworks in the area including James Campbell’s works, but this has not been conclusively proven.

Weston moved into the property in 1913, though his mother apparently remained in Clayfield. In December 1913 Weston was employed as a lecturer in electrical engineering at the recently-created University of Queensland. The university had been established in the jubilee year of Queensland’s separation, 1909, and focused heavily on professions with practical application. Engineering was an early priority. Streams within the faculty were quickly set up for mechanical, civil and electrical braches, with Weston appointed the first electrical engineering lecturer. His colleague, civil engineer Roger Hawken, owned the property next to Weston’s on Kidston Street and employed the same architect to design his home in 1916.

Weston died in after a short illness in 1918 at the age of 38. He had married in 1916 and so left a widow, Ivy, and a young son. Although he had died relatively young, Weston had already had what Queensland newspapers described as a ‘distinguished professional career’1, and his mother donated money to Sydney University for an electrical engineering scholarship in her son’s name. Ivy Weston sold the house soon after her husband’s death. The new owner, café proprietor George Schlavos, called the house ‘Acropolis’ and leased the property to Thomas Hall. In 1924, however, Schlavos sold Acropolis to Dr James Hemsley, a well-known doctor and surgeon. The Hemsley family named the property ‘Arden’ and hosted occasional social events there. They retained ownership until 1993.

‘Arden’ is a Federation style brick two-storey house with a stone base and restrained timber detailing on the verandah balustrading and gable. It has a terracotta tiled roof with a prominent chimney. Cream render and paintwork provide a striking contrast to the red brickwork of the house and this is echoed in the front fence and gateposts.

for the evidence it provides of the continuing development of Ascot as a fashionable residential address for Brisbane's professional classes in the early twentieth century.

as a good example of a substantial Federation style residence.

for its pleasing design, restrained detailing and use of contrasting materials.