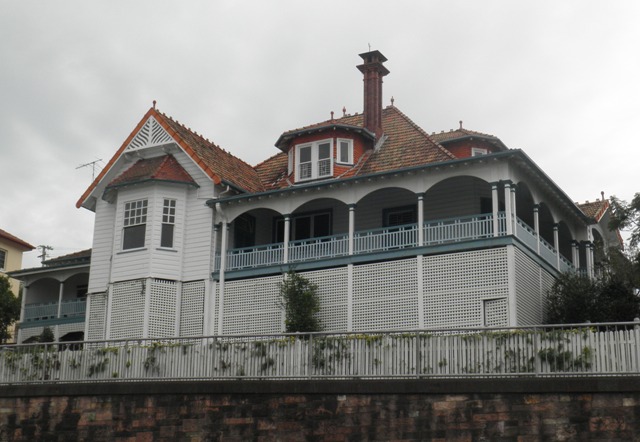 ‘Blair Lodge’ was constructed circa 1907 for the Munro family as their residence and designed by prominent Brisbane architect Claude Chambers. Built at a time when Hamilton was undergoing rapid growth, expanding its status as a suburb of the elite and well-to-do, Blair Lodge is an excellent representative example of the extensive middle class residential development that occurred in the Hamilton area at the beginning of the twentieth century. It is also significant for its considerable aesthetic qualities.

Hamilton was recognised as a desirable residential suburb from the mid-nineteenth century. From the 1860s large residences were constructed on its elevated land overlooking the Brisbane River. The suburb was close to recreational attractions including the Hamilton Hotel and the racecourse, and access to the city was provided via Hamilton Road (later renamed Kingsford Smith Drive) and the Breakfast Creek Bridge. In 1899 this accessibility was further improved with the extension of a tram line to Racecourse Road. Services including Hamilton State School (1907) and a reservoir on Bartley’s Hill (1907) provided for the growing population in the early twentieth century.

The land upon which Blair Lodge was built was part of a larger estate established in 1880. Sections of the estate were subdivided and sold off from 1900, with the portion on the very corner of Hamilton Road and Crescent Road purchased by Agnes Munro, wife of James. James Munro was a businessman who served on the boards of numerous eminent companies, including the Queensland National Bank, British India Company, Marine Board of Queensland and the AUSN Company.

The Munros engaged architect Claude Chambers to design a large residence for their new site. Chambers was a prominent architect who had been working in Brisbane since 1885. He was twice president of the Queensland Institute of Architects, and was president of the Australian Institute of Architects 1916 to 1918. He resided mainly in Sydney from 1915, but remained in partnership in Brisbane with Lange L Powell 1911-20 and EM Ford 1920-35. Chambers was particularly known for his designs for commercial buildings; when engaged by the Munros, he had just finished the design of the Commercial Travellers Association Building (QHR 600110). Other Chambers-designed commercial buildings include the Finney Isles Building, or ‘The Big Block’ (QHR 600142), Perry House (QHR 600103), and the first Winchcombe Carsons Woolstore, Teneriffe (QHR 600326). His residential work was nonetheless a conspicuous portion of his work and he designed other villas for wealthy clients, such as ‘Indoocombe’ (later ‘Ross Roy’) in Indooroopilly and ‘Wybenia’ in New Farm. ‘Blair Lodge’ is representative of his residential designs, displaying a broad range of his stylistic hallmarks.

The Munros’ elevated site was easily visible from the river and the design of the house took advantage of its feature position, with an eye-catching gabled, terracotta tiled roof, projecting dormers and high chimneys. Internally the airy rooms included pressed metal ceilings and stained glass windows in art nouveau style. Steep stairs provided access from Hamilton Road, and a lane ran at the back of the house. Hamilton appealed to Munro for its proximity to the river, and his new residence provided long verandahs overlooking the shipping on the river.

The house was sufficiently erected to be referred to by the Hamilton Town Council as a ‘residence’ in 1907, when a petition was raised for a road at the back of the house. The Munros had taken up residence in their new home by 1908. They named it ‘Blair Lodge’, Blair being Agnes’s maiden name. Munro died at the house in 1915 and his widow Agnes stayed on for some years before moving to Clayfield to live with her children. Blair Lodge was sold to the Ferguson family in 1920, and then to Edward Fowles in 1922. Both families owned property in central Queensland, and Blair Lodge appears to have been the Brisbane residence for both. Following Edward Fowles’ death in 1931 Blair Lodge was transferred to trustees for his widow, and the house was leased to a series of tenants.

The grand residence was used to host numerous social events from the 1930s. Blair Lodge was a commodious home and was ideal for dances, parties and fundraisers held by its occupants. Lady Goodwin, wife of the governor, attended a bridge party at the residence in 1931, and parties were held for the visiting Earl of Inchcape in 1940 and 1949.

Hamilton’s continued growth in the interwar period impacted slightly on Blair Lodge. The predominantly residential suburb was considered one of Brisbane’s most beautiful areas, not least due to attractive residences like Blair Lodge. Hamilton became known as part of Brisbane’s ‘dress circle’, a desirable address for Brisbane’s elite and working professionals, and its population nearly doubled between 1911 and 1921. This in turn brought increased traffic to Hamilton Road, rapidly overwhelming it. Small segments of the Blair Lodge land were resumed to widen the road and increase its capacity in the 1920s and 1930s.

In 1949 Blair Lodge fell vacant and was offered for sale. By this time the fashion for large houses had diminished. Family sizes became smaller in the post-war period, requiring less space, and the upkeep required for large houses like Blair Lodge was significant. The trend for post-war owners of grand nineteenth and early twentieth century houses was to convert them to boarding houses, separate flat dwellings or put them to use in commercial enterprises. Blair Lodge was reported to have 21 rooms, too large for most families, and it was proposed that the house be used to host wedding receptions and other events. The tenants of the 1930s and 1940s had demonstrated the house’s aptness for such functions. However, Hamilton residents raised concerns over noise levels and the conversion does not appear to have proceeded.

The house was sold to Robert Bond in 1950 for £8,000. Greek emigrant Bond was a businessman and proprietor of Bond Sweets Ltd. In 1951 he was engaged in constructing a new factory and work premises in South Brisbane (164 Melbourne Street, included on the BCC Heritage Overlay). One night in July Bond walked from Blair Lodge and was found dead the next morning along the riverbank at Pinkenba. Newly-widowed Mary Bond became the proprietor of Blair Lodge until 1959.

In the 1950s further road widening meant the stairs from Hamilton Road were relocated, Blair Lodge’s land was reduced from two roods and thirteen perches to just over two roods (a reduction of approximately 330m²), and a tall, stone faced retaining wall was constructed to Hamilton Road in front of the house. A garage facing Crescent Road was added in 1952. In the mid-1950s the house was divided into flats, though it was later reverted to use as a single family residence.

Blair Lodge is an elegant, timber-framed and -clad residence standing centrally in a large garden overlooking the Brisbane River in Hamilton. The site is on the corner of Kingsford Smith Drive and Crescent Road with rear access from Eden Street. Sloping to the south and east, the garden comprises lawns, stone-edged garden beds, concrete paths, a large rendered masonry stair with wrought iron lampstand, and mature shrubs and trees. An early timber paling fence surrounds the property.

The house is a sophisticated composition in a distinctive Federation style of high-quality workmanship and materials. Fronting Crescent Road to the east, the highset house is oriented advantageously to take in extensive southerly river vistas and breezes. The perimeter of the understorey is screened by timber lattice. The walls are clad with chamferboards and a wide, timber-framed verandah with scalloped valances and square dowel balustrade wraps the front and both sides. It has a prominent, multi-gabled roof clad with terracotta tiles and decorative finials and has a tall facebrick chimney with expressive detailing. The roof is steeply-pitched and has a number of attic rooms, which have projecting bay windows clad with shingles.

The interior layout of the house is intact with lofty rooms accessed from a central hallway. The rooms feature a range of beautiful decorative treatments including moulded timber joinery, pressed metal ceilings, and stained glass windows. An early bathroom fitout survives.

as evidence of the building boom that occurred in the area in the late 1890s and early 1900s, which saw a blossoming of the Hamilton area as a residential suburb appealing to Brisbane's elite and professional workers.

specifically a suburban middle-class villa in Brisbane. The principal characteristics include its elevated position above the river, large garden, substantial architect-designed residence of high-quality design, construction and materials. The layout of the residence is intact comprising a variety of generous rooms sheltered by a wrap-around verandah.

as a large fine house in a Federation style with considerable visual appeal. Designed by notable Queensland architect Claude Chambers, it features a skillful use of stylistic treatments, a striking use of decoration, and generously proportioned planning.