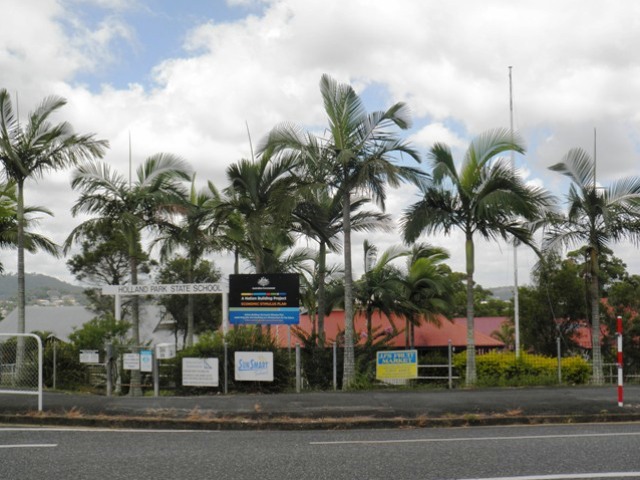 Holland Park State School was constructed in 1928, at a time of technological innovation in school design by the Department of Public Works. It was one of the first schools to be built in the ‘sectional’ design, which better accommodated changing educational requirements and Queensland weather. Holland Park State School has been an integral part of the local community since its construction in the late 1920s and provides evidence of the growth of the Holland Park area, particularly in the interwar and postwar periods.

Holland Park State School was built in 1928 on Water Reserve land on Logan Road, situated between the Abbotsleigh and Victor Roads. The Water Reserve was originally part of a 150-acre estate belonging to Julius Holland after whom the suburb was named. Holland’s estate was broken up in 1882 and lots on either side of the Water Reserve were advertised for sale in 1887 and 1891.

The banking collapse of the early 1890s impacted on the long-term growth prospects of Holland Park and consequently on the establishment of a state school for the area. It was not until the mid-1920s that the extension of the tramline to Holland Park encouraged rapid development in the area and it was ‘found necessary to build a school at the rear of the reserve to accommodate about 300 children’.

Requests in 1926 from Greenslopes State School to the Department of Instruction for additional accommodation for increased enrolments led to consideration for a new primary school at Holland Park. Local residents also petitioned the government. As a result the Department of Public Lands obtained three acres at the northern end of the Reserve for state school purposes.

In the following year, however, the District Inspector, Mr. Earnshaw, considered the plan premature, as “judging by the very poor attendances of both parents and children”, the local residents were not “reasonably desirous or anxious for a school”. In spite of the negative response from its District Inspector, the Department of Instruction took steps to increase the school reserve from three to five acres in anticipation of increased population growth in the area.

The School Building Committee, formed by local residents, redoubled its efforts to have a state school constructed on the Holland Park reserve and in 1928 was successful in obtaining approval. The school was completed that year and available for the first student intake at the beginning of 1929. It was an ‘L’ shaped building in the new ‘sectional’ design structure that provided, initially, for 120 pupils. However, the school outgrew its capacity in the first year. By 1930, a new wing was added, increasing the number of classrooms from three to five. Enrolments rose to 303 within two years, resulting in two more classrooms being provided in 1933 and two more the following year. In quick succession, Infants and Kindergarten divisions were provided in a new wing in the late 1930s. Increased space was also made available for sporting activities in 1940. Unemployed labourers provided much of the building work during the height of the depression.

During the growth period of the school, it was continually subjected to overcrowded conditions for both pupils and staff. There were many exhortations from the head teacher to departmental staff during the 1930s for new buildings and better facilities. While the most rapid growth of the school occurred in this period, the highest level of attendances were in 1955 (1052 pupils) and 1958 (1038 pupils). Construction of other State Schools in the area led to a decline in numbers at Holland Park State School from this time.

At the time of its construction in 1928, this school was one of those that represented a new phase in school design. The ‘sectional school’ as it was known was considered ‘an outstanding example of an architectural response to educationalists’ requirements’. As well as allowing for future changes in student levels, it was also described by the Department of Instruction in their 1929 report as ‘an attractively designed structure, well ventilated and lighted, and apparently admirably well suitable for the tropical weather conditions’.

Successive upgrades since 1929 gives Holland Park State School particular significance as an example of school building design evolution. Apart from the building that took place to accommodate a growing student population up to the 1950s, more recent additions include a pre-school centre, dental training clinic, toilet blocks and a tuckshop during the 1970s. In 1984, a new administration block was added to the complex. Although this latest addition faithfully replicates the late 1920s architectural style of the surrounding buildings, its placement blocks out the view of the original school building.

Currently, Holland Park State School continues in its pivotal role in the local community having provided for the educational needs of each generation since the 1930s. Further detailed analysis, however, needs to be conducted on the heritage value of the individual buildings on this site.

Situated on a very large site on the street corner of Abbotsleigh Road and Wilbur Street in Holland Park, Holland Park State School comprises a number of single storey timber-clad buildings, most of which built in the airy style of the late twenties.

Although later additions have been made to the school, the buildings retain their original general appearance and integrity.

The school buildings complex has become a gracious and important landmark in the area.

as an intact collection of school buildings that reflect the provision of state education for the changing population of Holland Park during the interwar and postwar periods.

as one of the first schools built with 'sectional' design features.

as a local school which has served the local community since the late 1920s, and has a special association with several generations of pupils and their families.