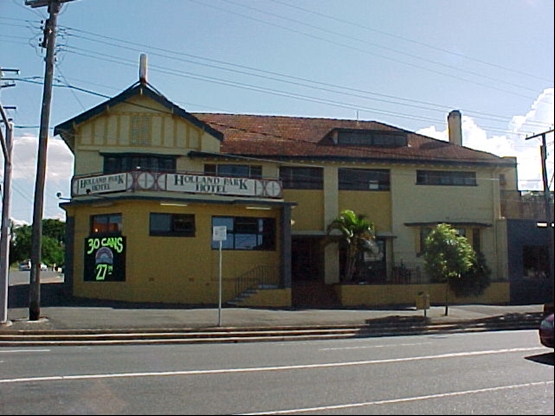 Holland Park Hotel was constructed in the mid-1920s at a time of rapid urban expansion. Located at the Arnold Street terminus of the Logan Road tramline, the hotel was strategically placed in a commercial hub at its inception. It is significant as one of many hotels built at this time that were leased to the rapidly growing brewery company of Castlemaine Perkins and Quinlan Gray & Co., Brisbane Ltd. The hotel also has strong community association as it has provided a meeting place for travellers and locals since the 1920s.

This hotel was constructed in the mid-1920s at a time of rapid expansion of the area due to the extension of tram routes along Logan Road and the subsequent boom in land sales.

The initial 22-acre block of land was proclaimed in 1864 with Deed of Grant being issued to Ebenezer Wakeham for £25.13s in January 1865. Title deeds indicate that title was transferred several times throughout the nineteenth century but it was not until the early 1920s that subdivisions occurred. The section on which the hotel stands was purchased by Alfred and Victoria Wright in 1926.

Post office directories record the existence of ‘Mountain View Hotel’ on this site in 1928-29, suggesting a construction date around 1926-27.  It was managed by D A Wright until 1936. Although the Wright family owned the land, commercial practice by breweries at the time led to the property being leased by Castlemaine Perkins and Quinlan Gray & Co, Brisbane Ltd under the ‘tied-house’ system.

During the 1920s when the ‘Holland Park Hotel’ was built on Logan Road, the area was on the verge of developing into a well-populated suburb of Brisbane. Prior to 1928, only one resident appeared in the directories on Logan Road between Crown and Marshall Streets with little development occurring outside this transport corridor.

The 1926 tramline extension to Arnold Street promoted a flurry of development on the intersection of which the ‘Holland Park Hotel’ was part. This also coincided with major road works on Logan Road. The newly amalgamated Greater Brisbane City Council carried these out in order to improve the surface and trafficability of the road. Travellers and residents had complained bitterly of the poor condition of Logan Road at the time, preferring to take an alternative route to the city via Kuraby and Ipswich Road.

The significant commercial and community hub that developed at the Arnold Street terminus as a result of this led, in turn, to a population inflow to the surrounding area, influencing the pattern and evolution of development in the southern suburbs of Brisbane. Evidence of the impact of these improvements in the area can be found in the postal directories from the early 1930s. As the decade progressed, directories recorded an increasing number of mixed businesses, grocers, butchers and others trading around the terminus, as well as a Community Hall adjacent to the ‘Holland Park Hotel’ itself.

‘Holland Park Hotel’ is still substantially intact except for recent alterations to the façade at ground floor level. The building is currently classified as a multi-purpose suburban centre that allows for a wide range of activities. Somar Pty Ltd currently owns the building.

This hotel building prominently located on the corner alignment of Logan Road and Yuletide Street in Holland Park West is a two-storey rendered masonry building with a single storey much later extension attached to its street front and timber framed casement windows along the side.

The roof is tiled with exposed roof timbers under the eaves and a chimney at the rear. The roof is composed of a transverse hipped roof core intersecting a street-facing gable to the left side.

The building, which has been refurbished, extended and altered over time, still expresses its original architectural elements mainly at the upper level with its original projecting front decorative gable and its (now enclosed) front upper verandah.

as a mid 1920s hotel constructed at a time of expansion in the Holland Park area, particularly around the tram terminus at Logan Road and Arnold Street.

as a hotel that has provided a social venue for local residents since the 1920s.