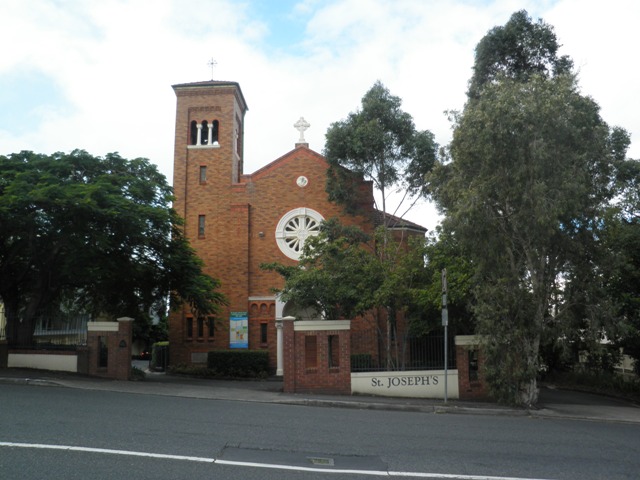 St Joseph’s church and school provides evidence of over a century of Catholic worship and education in the Kangaroo Point area. The construction of such a large, Romanesque style church in a working class area during wartime is a testimony to the faith and commitment of the local Catholic community. The church and school are associated with several prominent Brisbane identities: the land was donated by James Toohey in 1866, the church was designed by architect J.P. Donoghue, and Archbishop Duhig laid the foundation stone. St Joseph’s church and school is a local landmark in the Kangaroo Point area and has a special association with the lives of successive generations of Catholic school children and parishioners.

St Joseph's Church is the third church to be built on this site, continuing a tradition of more than a century of Catholic worship at Kangaroo Point. It was opened and blessed by Archbishop Duhig on 29 September 1940. St Joseph's was the forty-sixth church opened by Duhig since 1912, continuing his mission to provide suitable churches for the Catholics of Brisbane. Romanesque in style, the church was designed by J.P. Donoghue, of Donoghue and Fulton, a Brisbane architect whose other work for the Catholic Church includes the Holy Spirit Church, New Farm, built in 1930. During the 1920s, Jack Donoghue was a partner of Hennessy, Hennessy, Keesing and Co. who also received several commissions from the Catholic Church.

Land at Kangaroo Point was first subdivided and sold in the 1840s. By the 1850s, there were some eighty to ninety houses on the peninsula, including several fine residences. Various industries also operated in the area from this period, including a boiling down works, a soap and candle factory, ship building, foundries and sawmills. Residential development was consolidated during the boom of the 1880s with the result that the area surrounding the site of St Joseph's was quite densely settled by the 1890s, with working class homes in the lower regions, and more elaborate residences on higher ground.

Prior to becoming a parish in around 1880, Kangaroo Point was included in the parish of St Stephen's Cathedral. The parish of St Joseph's, Kangaroo Point, originally included East Brisbane and extended beyond Balmoral and Holland Park. St Joseph's is significant as the "mother parish" of several other parishes, including Coorparoo (1913), Annerley (1916), East Brisbane (1917) and Buranda (1937). The first parish priest of St Joseph's was Father Breen who served the parish from 1880 to 1915. After his death, the new church of St Benedict at East Brisbane which opened in 1917 was dedicated as the Father Breen Memorial Church.

The first Catholic church at Kangaroo Point was a timber church-school built by parishioners on a large block of land donated by Brisbane landowner, James Toohey, in 1886. This weatherboard church served as the parish church until it became too small, and a stone church designed by renowned Italian architect, Andrea Stombuco, was opened in 1887 by Bishop Robert Dunne.

The original parish priest of St Joseph's was Father James Benedict Breen who served the parish from 1886 to 1916. Initially Father Breen resided in a presbytery located at

St Killian’s College which operated on the site of the present St Laurence’s college until fire destroyed the school in 1899. Also destroyed in the fire were Father Breen’s residence and his personal library.

The first Catholic school was established at Kangaroo Point in 1881. Sisters of St Joseph taught the local children from the 1870s, but, after a disagreement with Bishop Quinn, were replaced by the Sisters of Mercy. In 1889 the convent was established and a timber school was opened in 1892. It was later demolished to make way for the school building designed by Frank Cullen which opened in 1950. The convent has now been redeveloped as part of the “Lockerbie Residences”.

For the first two decades of the twentieth century, Kangaroo Point and nearby Woolloongabba continued to develop as a residential and industrial district. The end of the Depression of the 1930s brought major changes to both Kangaroo Point and the parish of St Joseph's. The opening of the Story Bridge in 1940 transformed Kangaroo Point into a major transport route. At the same time, industry intensified because of Australia's involvement in World War II, with Evans Deakin building minesweepers and other vessels at their Kangaroo Point shipyard. It was during this period that the third St Joseph's Church was built.

Towards the end of 1939, the existing church was in a state of disrepair, with damp in the walls, borers in the timber, crumbling brickwork and an unsound roof. As the necessary renovations were estimated to be considerably more expensive than the construction of a new church, it was decided at a parish meeting on 21 October 1939 to demolish the church and construct a new building. Demolition of the church began a few days later. Services were held in the original timber church, then being used as a schoolroom, until the new church was opened.

On Palm Sunday, 17 March 1940, Archbishop Duhig laid the foundation stone of the third St Joseph's Church. There was a large attendance at the ceremony, and more than £1,000 was collected, testifying to the importance of the Catholic Church to this community. The building was constructed by builders Hutchinson and Sons at a contract price of £7,883. Additional costs brought the total cost of the church to £11,203. A sum of £1,500 was subscribed at the opening ceremony, which was, as the Courier Mail noted, "an achievement...all the greater because St Joseph's was a parish of working people". As was noted by Duhig, a great deal of money was also being subscribed to World War II funds. The total amount received towards the cost of the church by midday on the day of the opening was £4,226/15/2.

The church, which could seat 500 people, was designed specifically to suit the tropical Brisbane climate, with large folding doors in the bays of the nave. In keeping with the sense of tradition of worship at Kangaroo Point, stained glass from the previous church was used in the sanctuary of the new church. The church bell in the tower had been presented in 1929 by Dean O'Connell, the second parish priest of St Joseph's, in memory of his mother. Gifts for the new church included Australian marble, used in the High Altar and reredos, given in memory of Mr T.P. Morahan. A feature of the church was a large rose window depicting the four apostles.

St Joseph's Church represents more than a century of worship and education provided by the Catholic Church for generations of Catholic families at Kangaroo Point and the surrounding area. It has also long associations with the Hibernian Society, established at St Joseph's in 1886 with prominent Brisbane retailer T.C. Beirne as president. The erection of such a substantial church in a predominantly working class parish during wartime is evidence of the commitment to their faith by this Catholic community.

The site is occupied by the Romanesque style church, school and presbytery.

The church incorporates many of the features characteristic of the Romanesque style such as shallow buttresses, corbelling, rounded arch windows, west front and bell tower.

The building is rectangular in plan form with an apse protruding beyond the eastern end and vestries projecting either side at the eastern end. Small projections also occur towards the western end on the northern and southern sides. Small walkways, providing overflow space to the nave, link these projections with the vestries.

The building is constructed of brickwork laid in stretcher bond. Brickwork forming the plinth up to ground floor level is accentuated by use of darker bricks. This plinth which is a half brick proud of the remainder is capped with plinth stretcher bricks. Half brick thick buttresses provide stiffening to the side walls.

Side walls incorporate a three course corbelling forming a cornice supporting a further seven courses of brickwork to which is attached a fascia board and eaves gutter. Corbelling of the wall at the eastern end is further accentuated. The roof is covered with terra cotta tiles.

The western front incorporates a square bell tower on the northern side, a central entrance portico supported on corinthian columns, Romanesque style corbelled brick decoration either side of the portico terminating at brick buttresses, and a stained glass wheel window positioned in the wall above the portico. The western wall terminates in a triangulated parapet with a cross shaped finial mounted on the apex.

The semi-hexagonal Baptistry on the southern side incorporates single lancet stained glass windows and circular windows at the upper level.

The brick column supports to the side walkways are linked to the main walls by brick arches spanning between columns and buttresses. Walkway roof framing is supported on concrete beams which are deepened over columns to form capital blocks. Access to the nave from walkways is by means of panelled double doors. Stained glass fanlights are installed above the double doors.

Access for the disabled is provided by a ramp located on the northern side.

Stained glass Romanesque style twin windows with brick voussoirs, and which are located above the walkway roofs between buttresses provide clerestory lighting to the nave.

The square bell tower incorporating an open belfry, terminates with corbelled brickwork forming a support for the tower roof framing. The roof is sheeted with terra cotta tiles with a lightning conductor finial at its apex. Each face of the belfry contains two small columns supporting small brick arches springing from the column capitals. Natural lighting to the tower is provided by narrow vertical stained glass windows.

A two storey rendered brick school building with a terra cotta tiled roof is located on the northern side of the church. To the southern side is a timber-framed presbytery.

for the evidence it provides of the early intensive development of Kangaroo Point in the late nineteenth century, and the expansion of the Catholic Church in the early to mid twentieth century.

as part of a relatively intact Catholic precinct that includes a convent and presbytery from the late nineteenth century, a medium sized, brick Romanesque church built in the 1940s, and a school from the 1950s that replaced earlier schools.

as a notable city landmark due to its prominent location and as a good example of a Romanesque style church.

as the site of continuing Catholic worship and education from 1867and as the centre of the early expansion of Catholic parishes in the area, and the important role it played in the lives of successive generations.