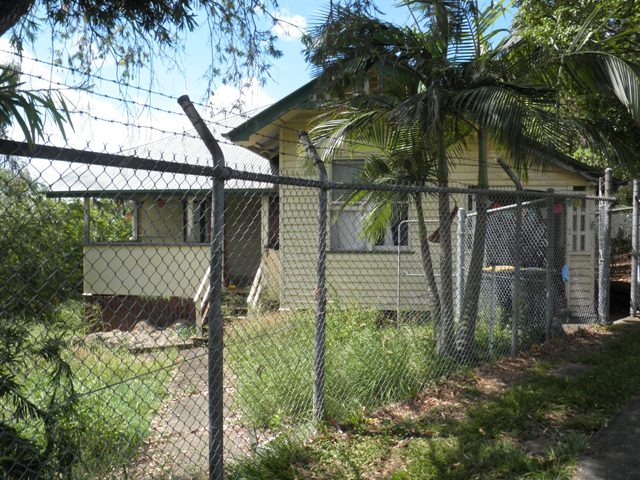 This timber police station was built in 1914. It is significant as a surviving, timber, purpose-built police station and residence built prior to World War I that provides evidence of the development of the suburb of Kelvin Grove and the changes in suburban policing over several decades of the 20th century. The Kelvin Grove Police Station closed in 1964 but the site continued to be used by the Queensland Police as a police dog kennel complex in the 1970s and 1980s.

The former police station at Kelvin Grove was opened on 20 May 1914. It conformed to the standard Police Station plan, including an office, front hall, breakfast room, kitchen, dining room, pantry, bathroom and three bedrooms.

The site of the Kelvin Grove station was purchased in 1912 for police purposes. The land measured one rood and 34.3 perches and was an elevated site fronting what is now L’Estrange Terrace. Tenders were called for the construction of the new police station to the design of the Deputy Government Architect, Thomas Pye on 18 September and 30 October 1913. The tender of ₤507 was accepted from K.G. Graham and Speering.

At the time, the street was named Victoria Parade. It then became known as School Terrace due to the presence of the Girls State School and Boys State School nearby. The street name changed again circa 1920 to L’Estrange Terrace, named for William L’Estrange who built the residence Hunstanton in the street in the 1910s. The official address of the former police station is now 227 Kelvin Grove Road, although the building is several metres above the road and only accessible from L’Estrange Terrace.

Enoggera Road was one of the main routes north to the gold fields of Gympie during the 1860s and by the late 19th century it was lined with houses, shops, hotels and other services. Development in the Kelvin Grove area was also stimulated by the mass immigration to Brisbane during the 1880s. As Spring Hill and Red Hill became crowded with dwellings, development was further facilitated by the opening of the tramline along Waterworks Road (Musgrave Rd) in 1897 and Enoggera Road in 1901. Kelvin Grove was one of several suburbs including in the Ithaca Shire. In 1903, Ithaca Shire was elevated to the status of the Town of Ithaca. By this time the population of the Shire had grown to some 3 000. The first decade of the 20th century was a time of rapid growth for Ithaca with a surge in development in the area (the population reached 17 500 by 1910. A local police station was one of the vital services expected by an emerging community. The Red Hill police station was later built on the corner of Musgrave Road and Enoggera Terrace, but it was removed from the site in 2000.

Postal records for 1914-15 list James McNamara as the policeman manning the new station. During the next few decades, several different policemen filled the position including James Kerr in the 1910s, Thomas J. Culhane and “Constable James Howard” in the 1920s and C. Elliott, who was Acting Sgt. in charge circa 1940.

Queensland’s first police force was established after Separation in 1859. The Police Act of 1863 restructured policing under a centralised organisation based on the Victorian model and created the position of Commissioner of Police. At the time of the establishment of the police station at Kelvin Grove, the Queensland Commissioner was William Cahill, appointed in 1905 and the state’s third Police Commissioner. The turn of the century had been a tumultuous time in the history of the police force with a Royal Commission into the management of the CIB and the wider police force. This resulted in a more efficient structure and improved conditions for police.

Cahill, a former member of the Royal Irish Constabulary, “…applied a thorough, militaristic approach towards police work”.1 He is remembered for his stern handling of the 1912 general strike in Brisbane when a tramway dispute sparked a strike by 20 000 unionists. Cahill used special constables (3000 were sworn in) and mounted police to control unarmed crowds and marching strikers. These strategies made Cahill unpopular with many, particularly Labour supporters. He retired on medical grounds at the end of 1916 and was replaced by Frederic Urquhart. Various reforms of the police force were carried out over subsequent decades by various Commissioners, including another restructure in 1935 and the introduction of a fingerprinting system in 1936. The 1930s Depression saw Queensland police take on an additional role – that of distributing relief payments and rations to unemployed workers.

This increase in police duties put a strain on the Kelvin Grove station. This was evident from requests in 1931 and 1932 for the construction of a door between the office and the living quarters to ensure privacy and the enclosure of the verandah so that police interviews were not carried out in front of relief workers. The building was painted at the time by a relief worker, W.A. Grice. In the annual report for 1935, Acting Sergeant Elliot requested the construction of an enclosed side verandah to provide the single men with quarters and the addition of double windows on the eastern side of the office to allow the distribution of relief rations without disruption to normal police duties in the office. As a result, a new timber verandah and porch were built on the eastern side with a galvanised iron roof, new doors, frenchlights and windows. A concrete wall, path and entrance step were provided for the porch. Lattice doors were added to the front verandah, replacing the “inconvenient” venetian blinds. These doors were not evident on an external inspection of the building in August 2000.

The Kelvin Grove police station closed on 7 October 1964 when the Division was incorporated into the Red Hill and Roma Street Divisions. Sergeant J.K. McDonnell, (later Deputy Commissioner of Police) resided in the building from May 1965 until his transfer in April 1966. The building was painted again at this time.

A police dog kennel complex was established in the building in the mid-1970s. This was the only Dog Squad in Brisbane at the time and was visited by police dog handlers from interstate and overseas. Additional kennels and fences were built in the grounds and the drainage improved in 1986. Ownership of the site remains with the Queensland Police Department.

This police station is a timber building with a corrugated iron hip roof with a gable projecting parallel to the street over the entry end of the building. The gable has a collar tie with timber battening infill in the upper half of the gable.

The entry is within the gable end and perpendicular to the street with a small entry porch within the built form of the building. The porch entry has a timber low arch over its opening and framing narrowing the opening on either side. Sidelights to this entry have vertical and horizontal timber battens.

Casement windows run along the majority of the street elevation shaded by the roof eaves. A fibre cement balustrade verandah space with double top-rail stair balustrades is also on the entry side of the police station.

for the evidence it provides of the evolution of suburban policing in Brisbane from the 1910s to the 1980s, and the development of Kelvin Grove in the early decades of the twentieth century.

as one of few surviving examples of a purpose-built timber and tin police station built prior to World War I in the northern suburbs of Brisbane.

as an example of a purpose built timber police station and residence built in the early twentieth century.